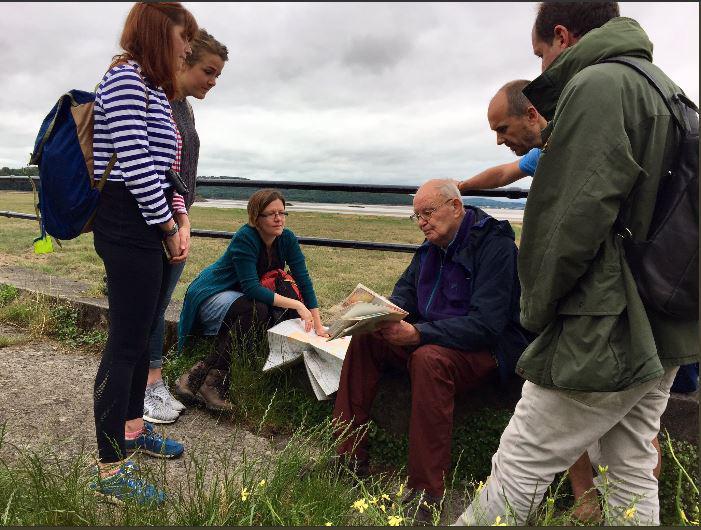 We are sad to announce that Professor RGH Bunce (‘Bob’), a founding member of ialeUK, died at Furness General Hospital on 23 April 2022.

Bob was born in Dorset and educated at Wellington School before taking a degree at the University College of North Wales, Bangor in 1962 to study botany. A Doctorate on the ecology of Ysgoluon Duon (The Black Ladders) of Cadair Idris (Gwynedd) combined Bob’s interest in mountain ecology and rock climbing that never left him. In 1966 he joined the Nature Conservancy (NC) at Merlewood near Grange-over-Sands in Cumbria. Bob remained in and loved this beautiful corner of NW England for the rest of his life, a feeling eloquently expressed in an article Bob wrote for the ialeUK Newsletter in 2017.

One of Bob’s many lasting legacies will be the Countryside Survey (CS), the first of which was completed in 1978; it is still running today. The origins of the CS emerged from the decision at the NC to undertake a woodland classification of Great Britain, with the first test of the method in the Lake District in 1969. This became the basis for the Great Britain Woodland Survey in 1971 (now being repeated for the third time in 2020-2022, funded by the Woodland Trust). When the NC was split in 1974, Bob joined the Natural Environment Research Council (NERC) as part of the Institute of Terrestrial Ecology (ITE). It was here that the then Director of ITE, Martin Holgate, asked Bob to survey the vegetation of Great Britain which eventually emerged as the first CS in 1978. A significant element of the success of the CS was based on an understanding of two critically important principles: methods of environmental stratification (later the ‘ITE Land Classes’) and statistical sampling. The CS benefitted from the advent of modern computing in the late 60s and Bob enthusiastically combined his considerable interest and understanding of statistics/sampling with digital computing, even if some of the early punch cards were used on occasions as ‘confetti’ for staff weddings!

Many of Bob’s friends and colleagues will have first been introduced to Bob at ialeUK conferences and meetings, introductions that often kindled a lifetime of teaching and research in landscape ecology. Whilst Bob was never backward in pointing out the deficiencies of, for example, the research design of a project this was always done with consideration and thought that helped to motivate rather than discourage. Sometimes it could be disquieting. At one meeting Bob famously pointed out after much muttering and hasty scribbles on a piece of paper, that the researcher appeared to have surveyed the major roads of Scotland rather than the actual distribution of the plant community of interest! Many of us have benefited enormously from the enhanced understanding that came from this unfailingly critical but fair-minded scrutiny. More generally, through the pages of The Guardian which he read daily without fail and Private Eye, Bob applied this critical scrutiny and fair-mindedness to the wider world, where he would rail against the stupidity of political decisions that appeared to have no basis of evidence or resemblance to actual conditions on the ground. Many of us will remember the conference in Manchester to celebrate 25 years of ialeUK at which Bob reflected on how pleased he was that ialeUK provided an encouraging and supportive network for early career researchers that almost always also included a memorable social event.

The founding meeting of the UK chapter of the International Association for Landscape Ecology (IALE) was at the University of Nottingham in 1992, convened by one of Bob’s close colleagues and friends, Professor Roy Haines-Young. The general theme of ‘Landscape Ecology in Britain’ set the scene for the annual conference of ialeUK on a range of themes including cultural landscapes, trees & woodlands, avifauna, ecosystem services, freshwater and marine environments, among others. Bob was one of the founding members of ialeUK going on to become chair for many years and helping to shape the structure of what remains a thriving and influential organisation to this day. He went on to become President of International IALE (2003 – 2007) at their international meeting in Wageningen, The Netherlands.

Bob remained a fellow of the Centre for Ecology & Hydrology (CEH) after his retirement in 2000, becoming a Senior Researcher working with his close friend and colleague, Rob Jongman, at the research institute Alterra in Wageningen. He followed this with a teaching and research appointment as Professor of Environmental Sciences working with another close colleague and friend, Kalev Sepp, at the Estonian University of Life Sciences in Tartu. These two appointments reflected another important aspect of Bob’s life, a lifelong interest in the landscapes of Europe, especially Spain and specifically the Picos de Europa, where he led several botanical field classes with students and staff from the Charlotte Mason College, now part of the University of Cumbria Ambleside Campus. He captured many of the landscapes he visited across Europe as a series of watercolour paintings, many of which survive and are greatly cherished by friends, family and colleagues.

Bob was cremated at Beetham Crematorium, not far from his beloved village of Allithwaite and the wooded limestone hills of the southern Lake District. As we waited to be ushered into the crematorium on a beautiful sunny May afternoon the scene unfolding before the group of friends and family was a startling reflection of his life and interests. The resemblance to the line drawings (by the late Chris Benefield, ITE Merlewood) that captured the typical landscape elements of each of the ITE Land Classes was startling. A farmer with his dog was letting a large herd of beef cattle into a field of lush, improved pasture that was devoid of botanical interest. The adjacent field of salad crops being artificially grown under plastic glistened in the afternoon sun. In the distance a very different landscape, the steep limestone crags of Hutton Roof, provided a stark contrast of diversity and richness. It was a fitting picture and memorial to Bob’s extraordinary life and achievements, although he would not have hesitated to explain to everyone present what was wrong with the famed landscape unfolding before us!

With Bob’s son, David, ialeUK is planning a one-day symposium in the NW of England in September in memory of Bob’s contribution to landscape ecology, followed by excursion to the limestone hills of South Lakeland. Look out for details on the ialeUK website.

He is survived by his wife Freda and his son David.