The biodiversity of a dry-stone wall 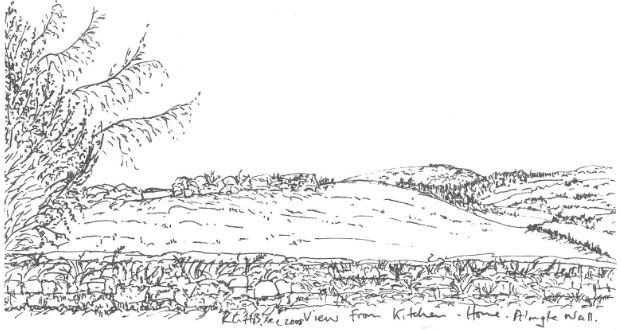 One day sitting in my usual place at the kitchen table, which has a direct view of the wall which bounds the garden, I had a perfect view of a grey squirrel moving along it. The wall links a short hedge to a birch tree and then to the trees in the bottom of the garden. This event set me thinking, firstly about the classical landscape ecological principle of corridors and secondly about the contribution of walls to local biodiversity. My observations over the years have shown the walls pose the usual conundrum as to whether the wall is a habitat or a corridor. I have seen birds mammals (cats rabbits and mice) use the wall as a corridor but without detailed recording it is difficult to prove that they are only using it for that purpose. For example the wren nests in the wall but also uses it to move through the garden. Therefore in this note [article], I have concentrated only on the biodiversity linked to the wall.

Walls are a distinctive feature of the local landscape and are recognized as such by the nearby National Park [The Lake District] and by support in agri-environment schemes. An internet search reveals many items describing the ecological and landscape significance of walls by local authorities such as Cheshire and the Mendip hills. The articles also detailed the importance of walls to the local character of the area as well as their significance to local history but several pointed out the lack of empirical studies. One exception was the Mendips’ where 149 plant species were found associated with walls including 75 vascular plants, 51 bryophytes and 23 lichens. An important point made in a Spanish contribution was that walls had vegetation and plants often associated with cliffs. In our area [South Cumbria] however this would be translated into limestone pavements and many of the species on my walls are also found there. Many articles also emphasized the importance of walls as refuges for fauna e.g. stoats, weasels, woodlice, wasps and bees. A further point is that the base of walls often have a narrow corridor of vegetation different from the field because the machinery cannot get too close. I have seen species typical of limestone grassland present in agricultural fields, where the rest of the field is fertile grassland.  At the base of the walls in our garden there are usually shade tolerant species especially ivy and in the field, nettles and thistles, the latter being good for goldfinches when seeding.

The geology of the rocks that form the walls reflects the local substratum. The main constituent is therefore Carboniferous Limestone which is the underlying rock. Some of the larger rocks have solution structures associated with exposure to rain, but many have been collected from  the glacial till and were probably turned up by cultivation-indeed some have plough marks upon them. The other rocks have been carried by the glacier, the most common being Silurian slate from about five kilometers way.  Granite comes from Shap, about 30 kilometers distant, and there are various other materials such as sandstone and bricks which are from human activities. There are also many rocks that are water worn presumably from glacial streams. Most of the walls are traditional, being built of dry-stone with two outer layers of larger rocks with the inner section filled with rubble. Some of the outside stones have been faced by the builders and this process is continuing with the recent rebuilding of some sections of the wall. They were presumably built when the house was constructed in the mid Seventeenth Century although the shape of the garden is unusual and has no apparent explanation. Three sections of wall have also been mortared during landscaping when the house was converted from two cottages and a smithy into a single residence, probably in the late 1940’s.

As I am a landscape ecologist specializing in vegetation I am not able to make detailed comments about the contribution of the wall to the local fauna. However, from my experience of mending the wall, it is clear that there are many species of spiders and beetles which use the wall as a refuge and habitat.  Wrens also nest in the walls and birds use them as staging posts.The interest of our cats in the base of the wall also suggests that there are small rodents present. The different types of wall [around the garden] have contrasting resources of floristic biodiversity. One of these is lichens but I am not competent to describe these,  although there are a range of different crustose species on the contrasting rock types. Instead, I will restrict myself to vascular plants and bryophytes. Overall there are over 22 species of vascular plants and over 15 species of bryophytes on the walls, as well as over 10 species of lichens.

Image below of a dry-stone wall made from carboniferous limestone, Arnside, Cumbria  (Credit: Editor)

Plants and mosses of limestone walls

The wall with the mortared cap outside the window has the richest flora. On the top of the wall are the mosses Grimmia apocarpa and Bryum capillare as well as lichens. On the side and base of the wall is Camptothecium sericeum and Brachythecium rutabulum. Growing in the mortar there are a few plants of broad-leaved willowherb and Welsh poppy. However, the most abundant species with almost 30 % cover is the fern common polypody.  Maidenhair spleenwort is also abundant but wall-rue less so. Some times of the year there is also a significant cover of green algae. The high cover of species is probably because the wall is in the shade of the house for most of the day.

The back wall (about 100 meters) has a poorer flora with relatively few bryophytes except on the base where Camptotheciem sericeum and Brachythecium rutabulum are widespread. Trichostomum murale is also present on limestone blocks. Ivy grows up the wall in places but has largely been removed as it destabilizes the wall. The front wall, about 40 meters in length, is also mortared and has some soil placed between stones on top originally for containing garden plants. Some grape hyacinth still remains but red valerian now forms about 80% cover. Wild strawberry, herb Robert and wall lettuce are also present but there are only a few bryophytes. Ivy has been a long term cover in part of the wall and is important for bees and butterflies in the autumn and for birds in winter when the berries are present.

Lastly, there is about 15 meters of hedge, which was probably planted on top of what is mainly a wall on the field side but an earth bank on the garden side. Many hedges were planted in this way in western Britain and the flora is mainly of species representing the type of soil , as well as being shade tolerant. On our bank there is female fern and a high cover of bryophytes such as Eurhynchium praelongum and Brachythecium rutabulum, as well as much stinging nettle amongst the stones on the field side.

In conclusion therefore the walls around the garden make a major contribution to biodiversity as well as acting as corridors and staging posts for the birds. Of course their primary function is to act as a boundary which, with regular maintenance, they are very successful. They are also pleasing aesthetically and fit well into the overall appearance and structure of the local countryside and have close affinities with the flora of local limestone pavements.