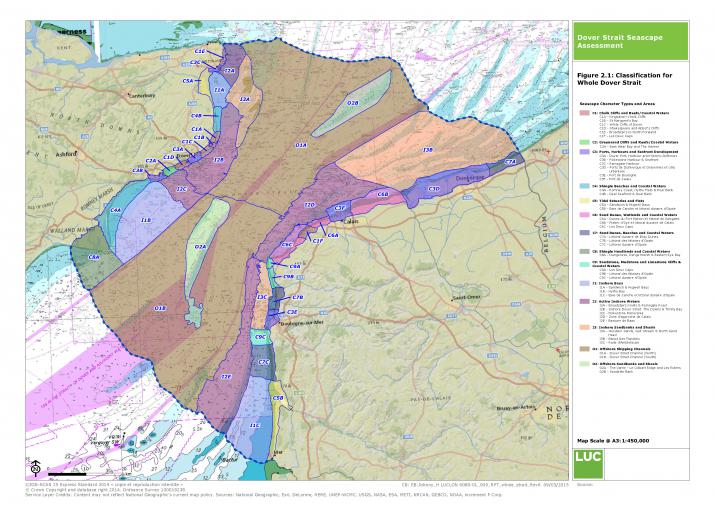 There is now greater interest in the coastal and marine environment than ever before, reflecting appreciation of its current and potential economic, environmental and recreational importance. This includes demand for developments that harness the natural resources of the sea, such as offshore renewables, or those in support of economically important industries such as tourism and aquaculture. Our coasts and seas are also valued parts of our heritage. A recent National Trust survey found that 94% of people agreed with the statement that ‘it’s important to me that Britain’s coast is kept beautiful for future generations to enjoy’ (1).

Until recently, our coasts and seas have been some of the least understood parts of the UK’s environment, with a lack of good information about their character and multiple values. By contrast, tools such as Landscape Character Assessment have been in place for many years to help a range of audiences, from decision-makers to planning applicants, understand the terrestrial landscape and how to reflect its importance in development proposals and land management decisions. The passing of statutory marine planning legislation in the last decade, including the Marine and Coastal Access Act 2009 for England and Wales, formalised the need to consider ‘seascape’. This legislative requirement further stimulated the production of Seascape Character Assessments across the UK.

What is Seascape Character Assessment?

Put simply, seascape character assessment (SCA) is a systematic way of analysing and describing the character of coastal and marine areas. The process helps integrate the way we deal with marine and terrestrial areas by considering them in a holistic manner, rather than viewing them as separate entities. It can be carried out at a number of different scales. Strategic assessments help inform high level planning policies, large scale land/marine management activities and site selection exercises, while more local assessments can influence scheme design as part of an Environmental Impact Assessment (EIA). Taking account of factors such as inter-visibility and important cultural and natural heritage values (see the ‘Seascape Wheel’ below), the technique maps and describes areas with broadly similar characteristics. Spatial analysis, backed by rigorous field (and boat) surveys and stakeholder consultation, are essential parts of the process (2). 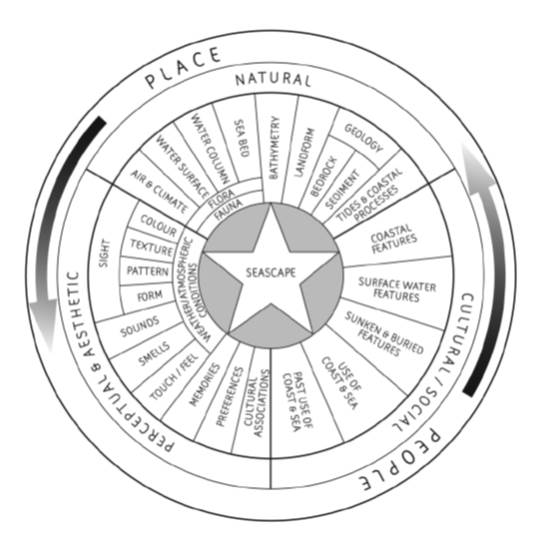 The Marine Management Organisation (MMO) has been working with Land Use Consultants (LUC) since 2012 to undertake SCA from region by region, to underpin statutory marine planning.  The next stage will be to ‘stitch together’ the regional assessments to produce a national map of ‘Marine Character Areas’ (MCAs) for England’s Inshore and Offshore areas , equivalent to Natural England ‘National Character Areas’ for landscape.  Note that while the landward boundaries of the MCAs follow the High Water Mark (the limit of marine planning coverage) the descriptions consider the close interactions between land and sea and describe the adjoining coastline. The MCAs tend to be smaller in scale where abutting the coast due to greater natural, cultural and social interactions between land and sea that influence character. The SCA for the South also developed an innovative method of mapping land-sea and sea-land visibility to understand the visual resource provided by marine areas.  This has now been applied across England and Wales as a strategic spatial tool to support marine planning (see heat map below showing strategic patterns of sea visibility from the land). 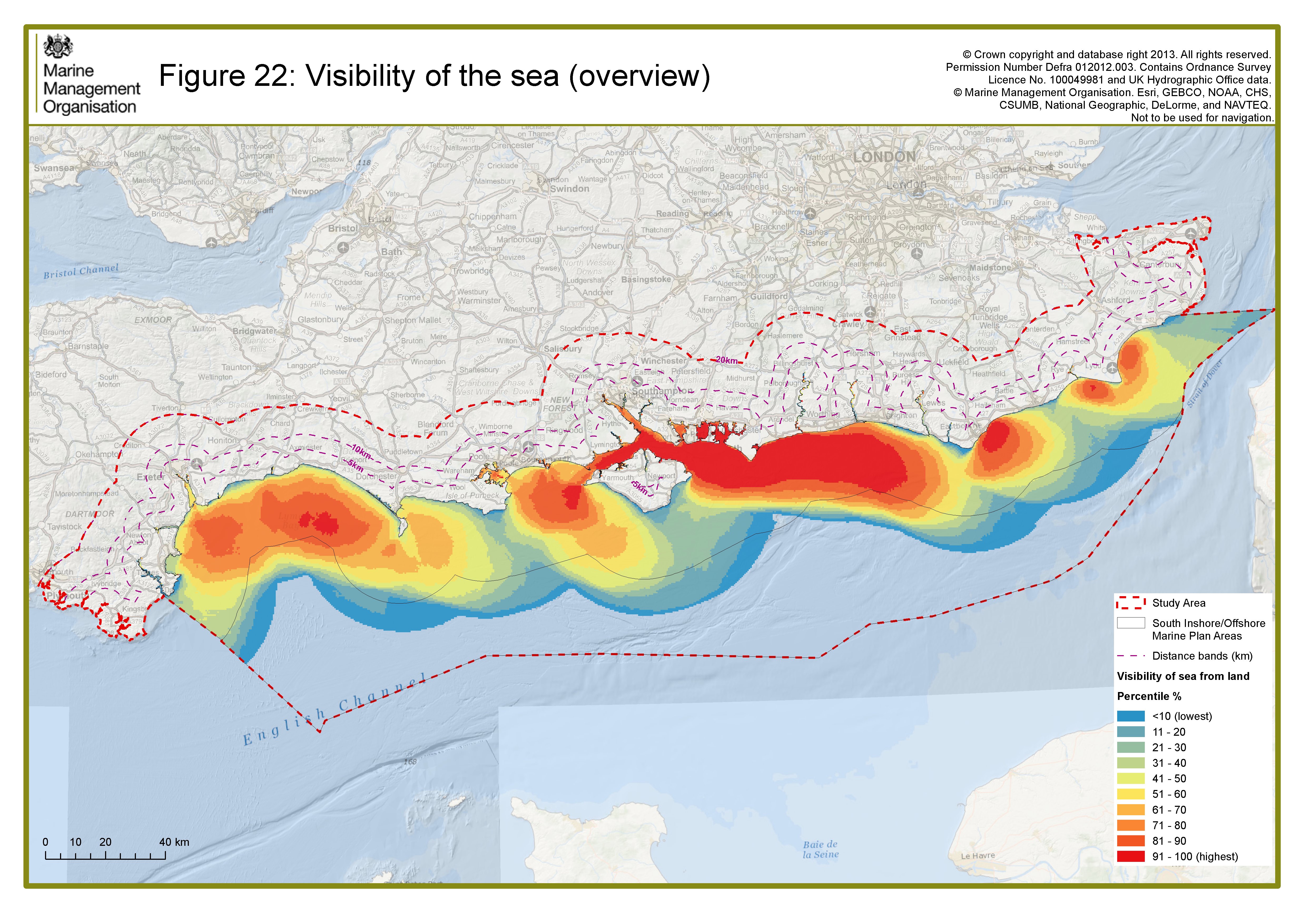 Seascape Assessment of the Dover Strait

In 2015 LUC completed a full assessment of the Dover Strait covering both English and French territorial waters and coastlines – large sections of which are nationally designated for their special landscape qualities (see image at the top showing a full local scale assessment of the Dover Strait) This study was part of the wider Interreg-funded NOSTRA (Network of STRAits) programme; seeking to share ideas and best practice in marine spatial planning in strait seascapes across Europe. Seascape surveyors undertook both land- and sea-based survey as part of this assessment, the latter by chartered boat (surveys undertaken in both English and French coastal waters) and the Dover-Calais ferry. The study reveals the remarkable unified natural and cultural heritage of the Dover Strait.  This includes evidence on the sea bed of the Strait’s creation, following the dramatic inter-glacial collapse of the land bridge which once connected Britain with mainland Europe.  The unifying chalk geology which crosses the sea bed outcrops in famous, world-renowned cliffs which are part of both countries’ national identities – the White Cliffs of Dover and the Grand Site des Deux Caps. The study provides evidence for the Dover Strait Implementation Plan and for exploring the designation potential of the whole Strait to recognise its international importance. The classification nests as a tier below the Marine Character Areas developed for the MMO to provide seamless national to local classification.

SCA at the project level

SCA should also form a key part of the design and assessment processes at the project level, feeding into an analysis of environmental effects through the Environmental Impact Assessment (EIA) process. A project-level assessment explores the varying nature of the site’s coastline and sea and the potential visual impacts of the proposal on landscape and seascape.  This information provides a baseline against which the effects of change can be judged. For example, an SCA was undertaken as part of the Swansea Bay tidal Lagoon Environmental Statement.

Sally Marshall (née Parker) is an associate landscape & seascape planner at LUC, starting at the company as a graduate in 2003.  She now leads all of LUC’s seascapes work. Contact her: Sally.marshall@landuse.co.uk