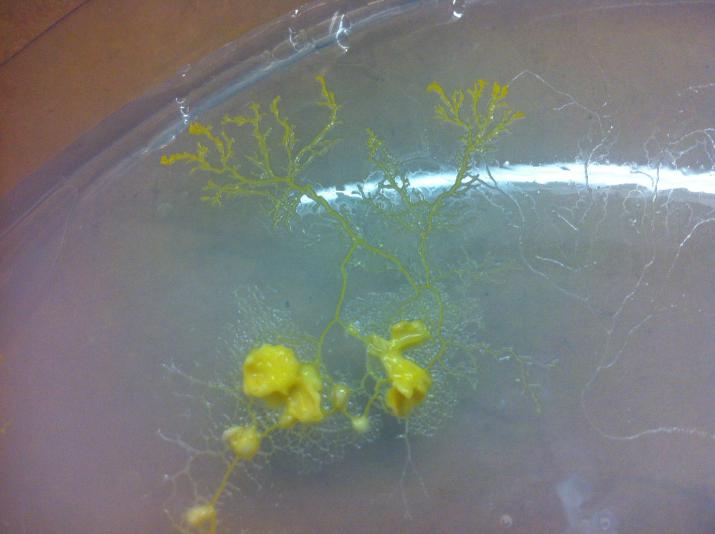 Weird and wonderful results are emerging as researchers make use of unusual tools and techniques, whilst exploring the darker sides of science. Two such techniques that have caught the interest of the media (and mine) are the use of 3D printing technology and slime moulds.

In the same way that ecologists study the interactions of living organisms above ground, Prof.Wilfred Otten and researchers at Abertay University’s SIMBIOS Centre (http://simbios.abertay.ac.uk/index2.php) in Scotland are taking advantage of 3D printing technology to do the same below ground. X-ray soil scanning generates a 3D computer model, which can then be 3D printed to create a scaled-up version of soil showing pore spaces like an intricate cave system. The team of researchers are interested in how fungi and plant pathogens interact with each other through different pore networks. Dr Otten explains that an older method (such as core sampling) of soil analysis is like “examining architecture by looking at a pile of rubble! - you would never be able to tell what the structure of the building had been before it fell down, how many rooms it had, or how many people lived in or used it! "

The Full article and further information can be found at:
http://www.bbc.co.uk/news/uk-scotland-tayside-central-25905147
http://www.pddnet.com/news/2014/01/3d-printed-soil-reveals-world-beneath...
May 2015 3D printing Exhibition in London http://3dprintshow.com/london-2015/

For years now, researchers have looked at biomimicry to solve human design problems in recognition that Nature’s time-tested patterns and strategies are well adapted, energy efficient and sustainable. A well-known example is Velcro, invented by a Swiss engineer after he removed burrs from his dog and took a closer look at how they worked. From a landscape perspective biomimicry is particularly interesting when used to understand spatial problems and establishing the most efficient routes, such as around congested cities or for planning new road and rail networks. One such organism used to this effect is a form of slime mould Physarum polycephalum.

Slime moulds are single-celled organisms which search for their food by sending out a number of branches in all directions. Once food has been found the branches that found nothing die back leaving only the most efficient route between the food and its body.  Since 2010 researches in Japan, US and the UK have been replicating city and country road and rail networks by using slime mould and pieces of oatmeal to represent railway stations! For example, Professor Andrew Adamatzky, director of the unconventional computing centre in the University of the West of England, found out that according to the slime mould's point of view, the M6/M74 should be rerouted through Newcastle, linking London to Glasgow along the east rather than the west coast!

So, never fear, if you haven’t got access to anylatical software or don’t have the cash to buy Arc-GIS then why not undertake some unconventional landscape ecology mapping with slime mould. The full article and futher information can be found here:
The creeping garden  http://www.creepinggarden.com/the-film/
The slimemould collective http://slimoco.ning.com/
http://www.theguardian.com/cities/2014/feb/18/slime-mould-rail-road-tran...