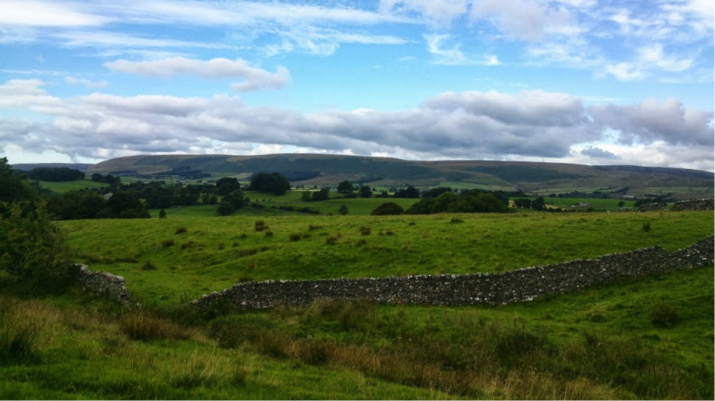 The field excursions during the recent IALE European Congress provided a fantastic opportunity to experience landscape-scale management and conservation in practice, mingle with other delegates and stretch our legs in the beautiful and diverse landscapes in and around Manchester. We provide here snippets from some of the excursions, sharing the experiences and lessons learnt.

Despite the crowds at Manchester Piccadilly, a group of 15 set off into the unknown for a tour of the famous Wigan Flashes. We were met by Mark Champion of the Wildlife Trust for Lancashire, Manchester and North Merseyside and, along with colleagues from the local authority, we set off on foot to Wigan Flashes.

The tour passed through areas of woodland (growing on pulverised fly ash) to the reedbed and open water of the Flashes themselves, illustrating the varying habitats found in such a small area. This part of the world is hugely important for its wildfowl populations, but the main story is the presence of such important sites on areas that were once industrial blackspots. For more site info see: http://www.lancswt.org.uk/places-to-see/wigan-flashes

The group then travelled through some of the last remaining wet, boggy grassland that survived drainage both during and after WW2 and provides important buffering and linking habitats between the sites along this urban fringe. The group finished at Cadishead/Chat Moss where lowland peat bog is being restored on a large scale. Only recently purchased by the Trust and still being partly worked for peat extraction, it showed the ambition of colleagues who are thinking big to help restore our fragmented habitats.

This large scale, interlinked series of sites not only tells the story of industrial legacy, but also provides a real insight into the issues, pressures and possibilities of landscape-scale conservation and restoration on the urban fringe; a message that colleagues from across Europe and beyond will no doubt take home with them.

The field visit to the West Pennine Moors took in two contrasting sites. The morning involved a very interesting visit to Severn Acres Local Nature Reserve in Bolton, run by Lancashire Wildlife Trust. James Hall, from the Trust, led the visit highlighting some of the challenges faced by a very urban site and the importance of local community volunteers in the maintenance of the reserve.

After a hearty lunch in a local pub the group met a representative from United Utilities to see how the water company is implementing catchment management to restore landscapes and their ecosystem services, as an alternative to end-of-pipe water treatment. The field trip was a very good complement to the conference talks, demonstrating many of the issues and landscape changes that were being discussed.

The Forest of Bowland, Lancashire - an Area of Outstanding Natural Beauty

Landscape and wildlife projects in the AONB include the Bowland Hen Harrier Project and the restoration of species-rich hay meadows, many of which are designated as SSSI. The ‘Bowland Hay Time Project’ is part of an innovative scheme led by Plantlife, which aims to conserve flagship wild-flower meadows; at least one in each county. Source meadows are also used, as ‘donor’ meadows, to provide seeds for creation of new meadows at ‘recipient’ sites.

Many farmers are actively engaged in Environmental Stewardship to help alleviate pressures caused by the past draining of peat moorlands and reliance on fertilisers. Rivers and streams run through the valleys, but there are issues with water quality resulting from the leaching of upland peat. United Utilities own 26,000 hectares of the Forest of Bowland and are currently working with landowners to improve the quality of water at the source. One shepherd told us how she has reduced her flock considerably to alleviate pressures on the land, however this is less economically viable and achieving a balance is difficult.

For more information on what is being done in the Forest of Bowland visit http://www.forestofbowland.com/

This field trip was to the Arnside and Silverdale Area of Outstanding Natural Beauty, looking at the Morecambe Bay Limestone and Wetlands Nature Improvement Area established following the Lawton review on ‘Making Space for Nature’. Taking the train from Manchester direct to the AONB offices at Arnside station, we were given an introduction to the workings of the AONB and its several partner organisations, and the range of social, economic and biodiversity issues and highlights of the area.

Next up was Leighton Moss – a wetland RSPB reserve since 1964 which boasts a splendid café, providing us with an equally splendid lunch.  Following an introduction to the site’s wildlife, history, and management problems/successes, we had a tour of a recently acquired extension to the reserve seeing the successful reedbed and wetland regeneration.  Issues discussed revolved around the site’s iconic species (bittern, bearded tit and marsh harrier) and the differing states of reedbed succession/quality needed by each, and how far management should and could go for single-species management.  The site’s geographic isolation from other similar reedbed sites, and its hydrological requirements were also touched on. Overall, an excellent day in the autumn sunshine.

The field visit to Risley Moss Local Nature Reserve, a site of former peat extraction, provided an excellent example of long-term restoration, including both successes and challenges. Mark Cozins, (Risley Moss Ranger) and Dr. Paul Thomas (from Natural England) provided a very informative and engaging introduction to the wildlife on site, talking us through the re-wetting scheme, which began in 1978. This long-term restoration faced many challenges, most notably locating drains, and depicting past management strategies applied to the area using old aerial photographs. Despite these challenges, in recent years the restoration project has achieved success through the creation of a series of scrapes and bunds to retain water and encourage the re-colonisation of sphagnum mosses.

After the talks and an appetizing lunch, we embarked on a tour of the nature reserve grounds, which allowed us to see the impacts of the restoration techniques past and present. We also got to climb the observation tower, providing a stunning view across the landscape, and the diverse wildlife it supports.

It is evident that current management encourages users to appreciate the beauty of the mosses and effectively balances conservation and recreation. Overall, a very interesting and informative day out.

Many thanks to all of those involved for making each and every field visit an enjoyable and stimulating success, particularly those who gave up their time to talk to the delegates; we all had a fantastic and insightful day out.