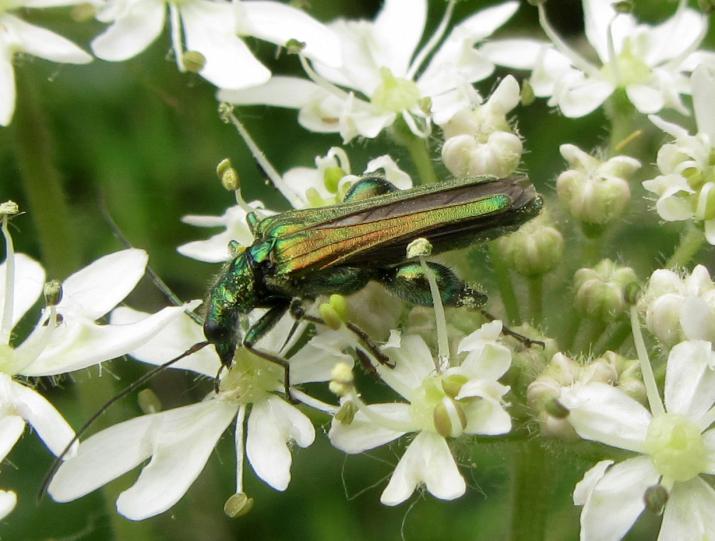 At a time of great uncertainty for landscapes in the UK, it’s more important than ever to understand how landscape change might impact biodiversity, whether that’s through potential Brexit-driven changes to agricultural practice or new urban development. As by far the largest component of biodiversity, at least in terms of species richness, invertebrates are obvious targets for research. We know that invertebrates are important indicators of environmental change; however, the current taxonomic scope of landscape research remains fairly small and the response of various taxa to landscape factors is heterogeneous (1). Within this framework, my research in the School of Biological Sciences at the University of Reading explores the composition of beetle communities in response to landscape structure and change. Ultimately the project aims to provide useful new evidence to inform landscape conservation projects (which typically is often based on ‘big-ticket’ groups like birds), landscape planning and design.

The project focuses on three beetle communities inhabiting mosaic landscapes in Southern England. The first community is flower-visiting beetles, which were surveyed by inspecting cow parsley and hogweed blooms in the spring and early summer. These umbellifers (family Apiaceae) are perhaps ideal sampling platforms, a kind of natural insect trap. They’re hugely abundant and well-loved as important features of the spring flower landscape (Figure 1 below), but they are also known to be key ecosystem plants that support a wide variety of insect species (2,3). Does the community of insects they support reflect the heterogeneity of the surrounding landscape; if so, at what spatial scale is this important? 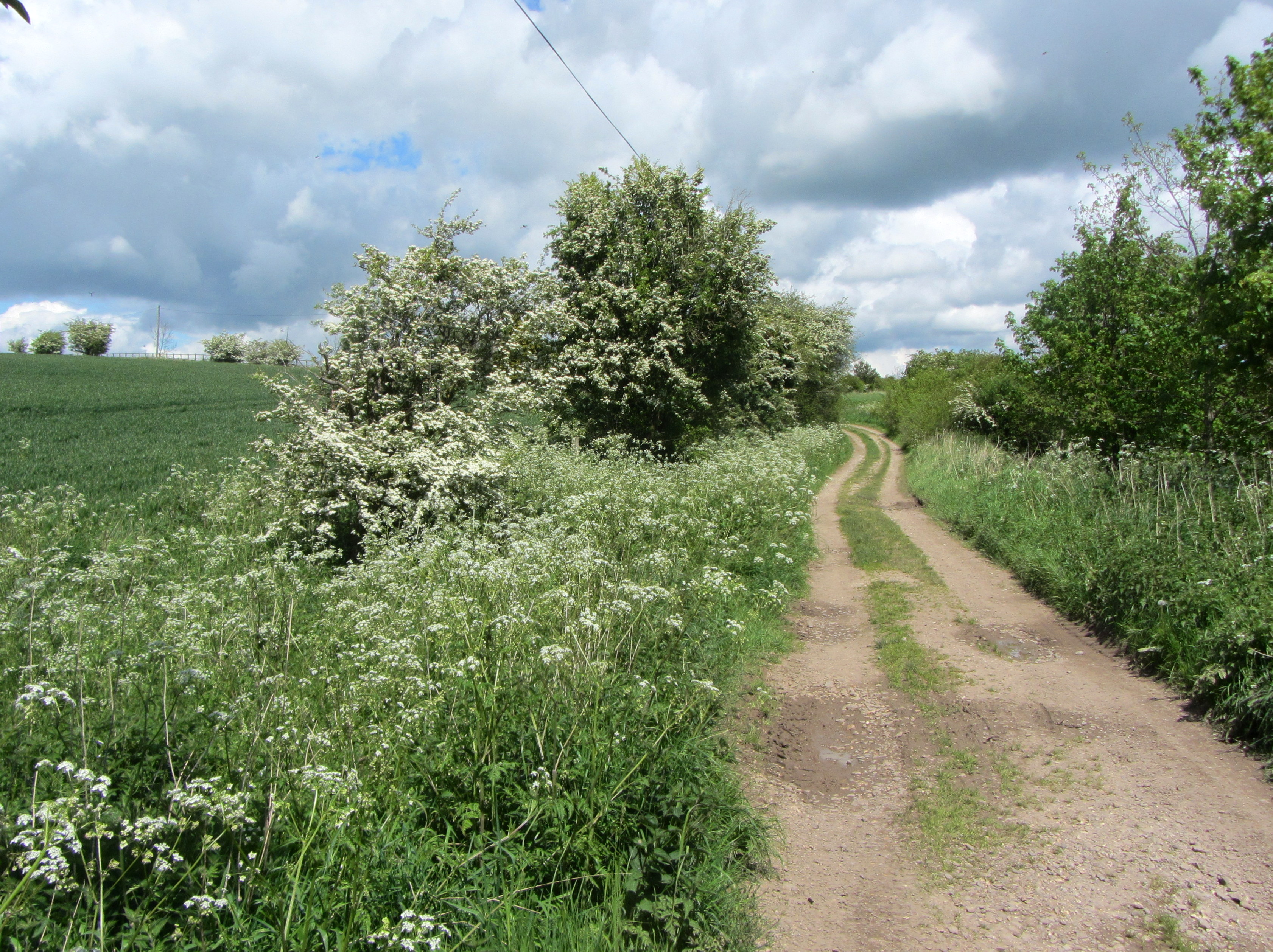 So far, over 10,000 beetles from at least 52 species have been identified from this project. Comparing the beetles recorded with the composition* of the surrounding landscape shows that a number of species in the community respond to landscape composition at this scale. Examples are shown in (Figure 2 below). The next step will be a complete community analysis looking at the importance of landscape at a range of scales. We will also be incorporating linear features along patch boundaries into our landscape model**. Linear features and patch boundaries are often too small to be captured by OS Mastermap but may contain important habitats for beetles such as mature trees, facilitating population dispersal.

*A 200 m buffer based on reclassified OS Mastermap data. This scale was chosen as representative of the range of known dispersal distances for some of the flower-visiting beetles encountered in this study (30 – 150m), it is also comparable with other studies.
**i.e. the complete set of spatial data used to represent landscape processes. A model because by necessity it is incomplete. 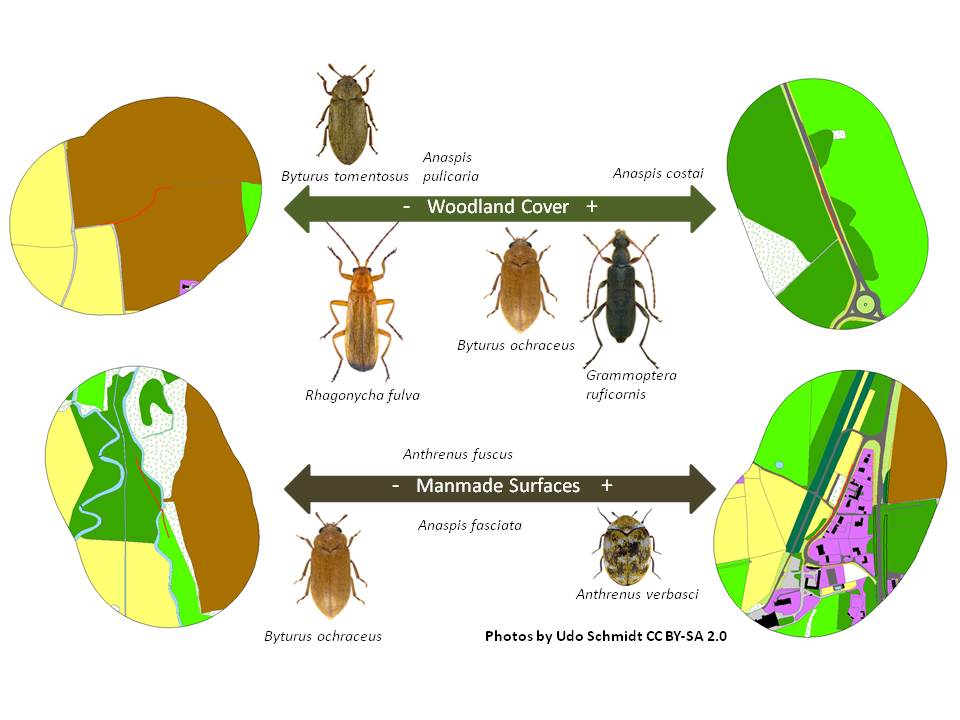 The second focal community is the beetles of woodland floors. This builds on previous work at Reading by Dr Jess Neumann and colleagues (4); we’re adding the question of urbanisation into this framework as well as considering a wider variety of beetle families sampled with pairs of low-cost trap (FIgure 3 below). Urban landscapes are not just ‘grey walls’ to wildlife; they comprise their own mosaic of gardens, small woodlands(2) and other greenspaces, providing connectivity through inhospitable manmade surfaces in a way that could be compared to networks of semi-natural features in intensively farmed arable landscapes. In this way urban areas can support invertebrate biodiversity (5,6).

With a lot of data still to sort through, results from this project are very much preliminary. So far, it appears that smaller bodied (generalist) Carabid species are more abundant in smaller and urban woodlands, whilst larger bodied (often flightless) woodland specialists are more abundant in larger woodland patches. So, the biodiversity of small urban woods is not necessarily different to that of their rural counterparts, but the species composition is different. It will be interesting to see whether this relationship holds for other families for which I have data, predominately the rove beetles (Staphylinidae). One crucial improvement to the analysis done so far will be to use high-resolution Mastermap data, partially classified using aerial photography, to better represent levels of urbanisation in our landscape model***

***Current proposed scales are between 200m and 500m, but may vary depending on species, end use of results.

The second stage of this part of the project will be to consider the influence of historic landscapes. (Dr Neumann’s) research shows how the distribution of some larger, less mobile carabids is better predicted by landscape composition in the 1930s than the surrounding landscape today(7). Much of the urban development around woodlands in the current study has been built since that time, so our aim is to test whether the same relationship holds in urban landscapes and compare responses to landscape change in areas dominated either by modern agriculture or urban development. Identification of beetles and landscape classification for this study is currently being completed, our aim is to analyse the data in late 2017 and submit for publication in the first half of 2018.

For another perspective on beetles on an urban gradient, we have also trialled sampling dung beetles (as well as species which generalise on many forms of rotting vegetation) using a very simple horse manure baited trap. One would expect dung specialists to be less frequent in urban locations, but otherwise the generally high mobility of this group means it is not immediately clear that urban landscapes would prove an impediment to their dispersal. Given the right breeding conditions, what sort of urban landscapes could sustain the biodiversity of generalist decomposers?

Forty-eight greenspace locations in and around Reading were sampled in the summer of 2015: 16 entirely surrounded by urban areas, 16 in the adjacent ‘urban fringe’ (within 1km of urban landcover) and 16 at least 1km away from urban land. Initial analysis shows that the species richness of this community was significantly higher in rural greenspaces than in town (Figure 4 below). As a measure of biodiversity, species richness is relatively crude as it does not offer an entirely clear indication of ecosystem health. For example, species richness in a community comprising reduced populations of native species and a few introduced alien species is higher than for the equivalent intact, native community. Likewise, species richness in secondary woodland may be higher than in lowland heath but will comprise fewer species of conservation concern. More in-depth community analysis of this data and the possibility of further fieldwork ahead for this project should reveal community level changes that aren’t captured by relatively crude measures such as species richness. 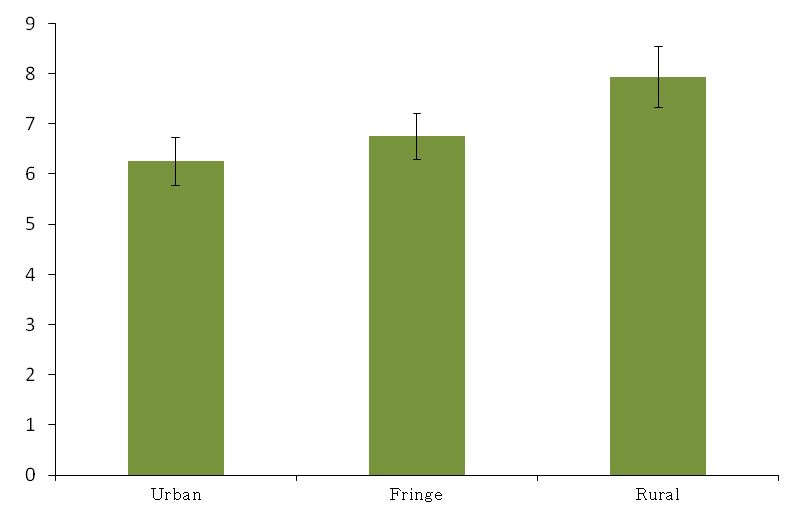 So far, this research provides additional evidence that habitat fragments in urban areas can maintain biodiversity but that species communities may be diminished or altered. The flower-visiting beetle work shows that some species respond to landscape structure at a relatively small spatial scale (200 m), meaning that ecologically sound landscapes for beetles can be planned within the context of a single farm or development site.

In practice, this might lead to landscapes being perceived as unattractive or sub-optimal for other uses (Hunter & Hunter, 2008), especially in residential developments. A key challenge for developers is to build ecologically sound habitat networks into new urban landscapes in a way that is practical, affordable and acceptable to the eventual inhabitants. For ecologists, our challenge, perhaps, is to work on changing perceptions so that insect-friendly landscapes are not thought of as ‘untidy’ in the first place.

To keep up to date with this interesting research, follow Chris's blog at https://chrisfosternature.wordpress.com/ or on twitter @hatbirder