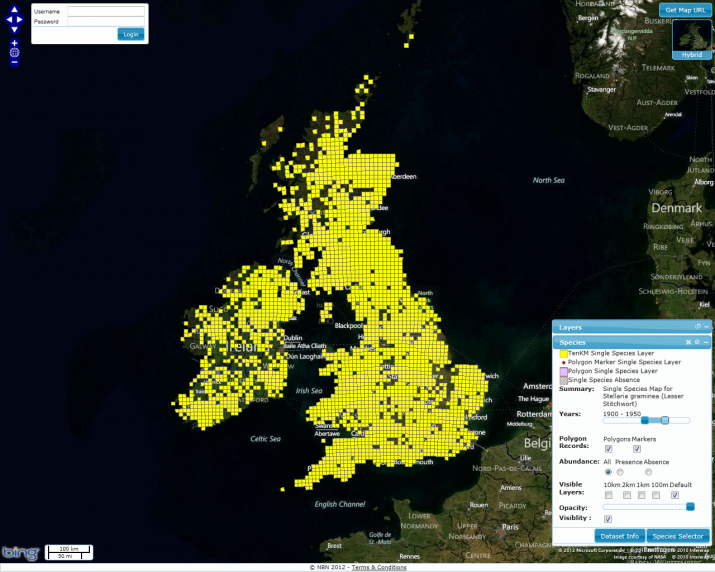 Some of you reading this article will hopefully have heard of the NBN, but if you are unaware of exactly what it is and what it does, here is a brief summary.

What is the National Biodiversity Network?

The National Biodiversity Network (NBN) is a collaboration of organisations which are all committed to sharing biodiversity data and making it freely and publicly available.  The organisations involved range from the government agencies, research organisations, local record centres, conservation charities and local and national recording groups.  The NBN Gateway is the internet portal that allows anyone to access this information.

The NBN Gateway allows users to search for information on species across the UK from 10km scale up to six figure grid reference detail in some cases.  It is possible to select only BAP (Biodiversity Action Plan) species or a particular site and it also allows the data to be time sliced to show how distribution is changing.  It also, increasingly, allows users to search for information on habitats, with many specific datasets being provided by the likes of Natural England, Countryside Council for Wales and Joint Nature Conservation Committee.

The NBN Gateway and its data providers

The number of organisations currently providing data to the NBN Gateway is 155 with 633 separate datasets covering almost 69 million species (as at February 2012).  Importantly, each of these data providers retains ownership of their data so, in essence, the Gateway simply acts as a data warehouse.  This is an important point in how the NBN works since it means that full control remains entirely in the hands of the data providers.  It also indicates the vital role that data providers have in the NBN - without them it wouldn’t exist – but there are still many more data held by numerous organisations, which are not yet supplied to the Gateway and which are therefore not easily accessible.  Our work with current and potential new data providers to ensure the ongoing flow of data through the NBN is essential.

How can the NBN be of use to IALE?

The NBN and the data available through the NBN Gateway are being used in increasingly practical ways.  A number of examples are listed on the website, including how Cambridgeshire & Peterborough Environmental Records Centre is involved in a project to describe the biodiversity present within the Fenland National Character Area.  The final report will set out land management plans for species assemblages based around the analysis conducted.

CABI Plantwise is also using NBN data and combining it with other information to provide a comprehensive knowledge bank on crops, pests, diseases and weeds.   The GB Non Native Species Information also uses data from the NBN Gateway, which it accesses using web services

We have also developed the NBN Higher Level Stewardship tool.  This system allows users to draw a polygon to represent a holding which, using a series of rule-based filters, is run against NBN Gateway data to produce a list of relevant species records, which are then displayed by likely habitat niche.  This demonstrates how data from the NBN Gateway can be used to help make better conservation decisions.

The NBN is also the UK node for the Global Biodiversity Information Facility (GBIF) whereby UK data can be shared in a global context for research and analysis.

NBN web services allow another website to display distribution maps on their own website, thus retaining their own brand identity, but powered by data from the NBN Gateway.

The information provided here is only an introduction to the NBN.  If you would like to find out more, please visit the NBN website www.nbn.org.uk, where you can find out all about the Network and search the NBN Gateway.  On the website you will also find guidance if you are interested in using the NBN tools or data as well as the terms and conditions of use.

You can also sign up to receive NBN eNews so that you are kept up to date with the latest news and developments from across the Network.  You can also contact us at support [at] nbn [dot] org [dot] uk