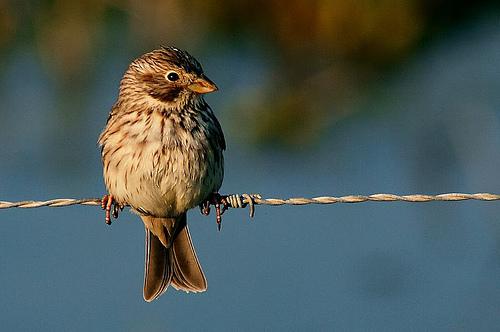 The paper, published in the avian science journal IBIS, reports on work looking at the number of wintering birds feeding on fields planted with plots of wild bird seed mix. In East Anglia, the research found that there were a significantly greater number and range of seed eating birds like tree sparrows, corn buntings and yellowhammers in plots planted as part of the Natural England funded Environmental Stewardship (ES) schemes than in other plot types.

Several species of farmland birds rely on seeds to survive the winter, but their populations have plummeted in recent decades. Tree sparrows have declined 94 per cent since records began in 1970. Corn buntings have declined 90 per cent and yellowhammers 54 per cent over the same period.

The research recorded densities of around 30 birds per hectare in plots which were in Entry-level and Higher-level Stewardship compared with two birds per hectare in traditional game cover consisting of maize. The ES cover featured a wider range of different, seed rich crops such as kale, linseed, millet, barley and fodder radish.

RSPB Conservation Director Mark Avery said: “This research clearly shows the value of Environmental Stewardship in providing a much greater variety of the seeds that small farmland birds need.

“The RSPB, Natural England and the industry’s Campaign for the Farmed Environment, are urging more farmers to include wild bird cover and other measures on their land to help wintering birds. This research goes some way to proving that those farmers across the UK who are taking up these environmental stewardship options are making a real difference. “

“We should not accept that the long-standing declines in many farmland bird populations are somehow inevitable – by continuing to develop their already strong working relationship, farmers and conservationists are demonstrating that very positive results can be achieved.”

The results described in the paper form part of a larger study into the effectiveness of environmental stewardship which is monitoring 85 farms in stewardship and 30 control farms.

Dr Avery concluded: “Publicly funded schemes to support wildlife need to demonstrate that they are delivering results which is why this research is so important. It is only with robust scientifically researched measures like these that we can halt the catastrophic decline of farmland birds and effectively support the activities of conservationists, Government agencies and farmers in working together to protect our native wildlife.”

Farmers who would like more advice on supporting their environment are being offered extra support through a range of four “how to” leaflets. The titles - Farming for Birds, Farming for Farm Wildlife, Farming for the Historic Environment, and Farming for Cleaner Water and Healthier Soil – will enable farmers to make the most of their ELS agreements by choosing the measures best suited to their farms.