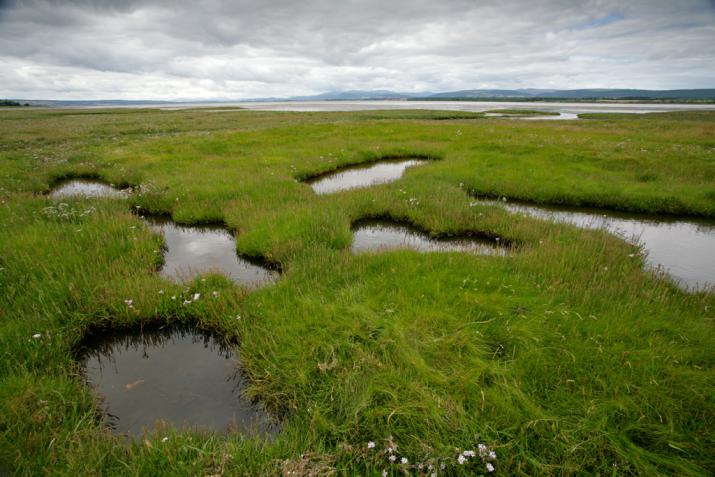 The IaleUK Seascapes conference in Edinburgh last year was very insightful. We learnt that there are a huge variety of coastal landscapes (seascapes) in the UK and in Europe, all with a variety of pressures and often unique solutions to problems. One pressure which is growing in importance with inevitable impacts is sea level rise. It will affect coasts all round the globe but the impacts will not all be equal. On top of sea level rise is an increased threat from storms battering our coasts, and we have seen a few of those this winter.

The soft coasts and firth (estuary) seascapes of Scotland’s south and east are particularly vulnerable to climate impacts, as is the nature that relies on these wet, muddy habitats. Saltmarsh is already fragmented because much of our historical saltmarsh was reclaimed for agriculture or development. A study of the Forth (1), in Scotland showed that 50% of saltmarsh was lost in this way. Now, the narrow remnants of these wet, muddy habitats are squeezed between flood embankments and the rising tides, unable to colonise inland as the tides rise.

Ironically the very habitat under threat can protect us from sea level rise and the risk of flooding. Saltmarsh is a natural buffer around the coast – 50% of wave energy is absorbed by 10-20m of saltmarsh (2). But squeezed as it is, this protective ability is lessened and the risk of waves overtopping or breaking embankments and the sea flooding inland areas is greater. 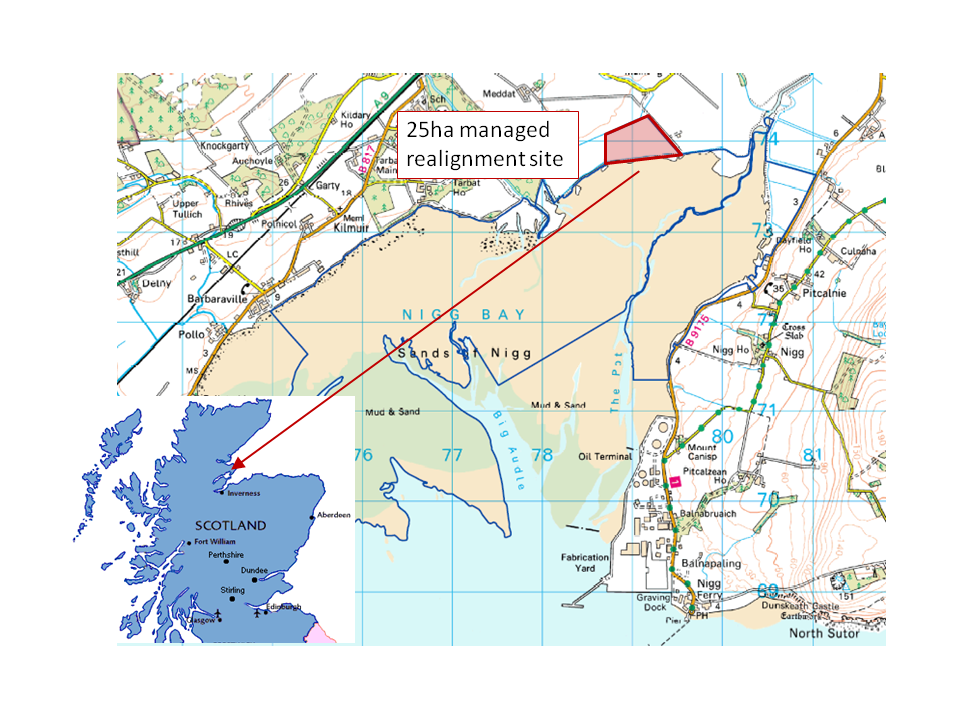 In 2003, RSPB Scotland completed Scotland’s first ever managed realignment project at RSPB Scotland’s Nigg Bay reserve (3). A 25ha field, locally called Meddat Marsh, was returned to the tide’s influence, using the managed realignment technique, half a century after it had been converted to agricultural use. Managed coastal realignment involves breaking a hole in the sea wall to allow an inland area to be inundated by the tides in a controlled way, but not before the new tidal area is enclosed by a new flood embankment. This provides space for the habitat to return and natural processes to take over, but can also help prevent coastal flooding.

More than 10 years on since the old sea wall was broken, the saltmarsh has recolonised and increased saltmarsh in the bay by 30%. Four surveyed species of mud-dwelling invertebrates (snails, worms and shrimps) were found on the site in the first winter, establishing much quicker than expected. These invertebrates are the key food for waterbirds, with 25 species now using the site, such as redshank, bar-tailed godwit and whooper swan. The managed realignment site is one of the last areas in the whole of Nigg Bay to be covered by seawater on the incoming tide. As a consequence it provides valuable extra feeding areas as the tide comes in and safe roosting areas at high tide. During windy conditions and in high spring tides it is an essential refuge for up to 2000 waterbirds. Find out more in the monitoring report accessible here (4).

The project has been a resounding success for habitat creation and wildlife. It showed that this technique works in Scotland - what’s needed now is much more of this type of land use change around the coast. There are many potential areas principally located in the Solway, Forth, Tay and in the area of the Beauly, Cromarty & Dornoch Firths.

We need to recreate a swathe of lost intertidal habitats along Scotland’s coasts to protect us from flooding and climate change, as well as providing more homes for wildlife.

To make this happen Scotland needs a new blueprint for our seascapes – for coastal adaptation and change. A plan which identifies areas for managed realignment and prioritises nature-based adaptation. The Scottish Government also needs to provide new funding which actively supports managed realignment. At present Scotland’s Rural Development Programme only funds a small part of the overall cost and this holds back action. Local Authorities also need to be strongly encouraged and empowered to choose sustainable and long-term natural flood management techniques, such as managed realignment, when making plans to protect coastal communities.

Our seascapes are in the front-line of climate change but in policy they are often lost in the no-mans-land between the production focussed rural policies and marine planning. Our wet, muddy coastal habitats provide homes for nature and protection for people. If we help nature create more coastal habitats it will help us in the face of a changing climate.