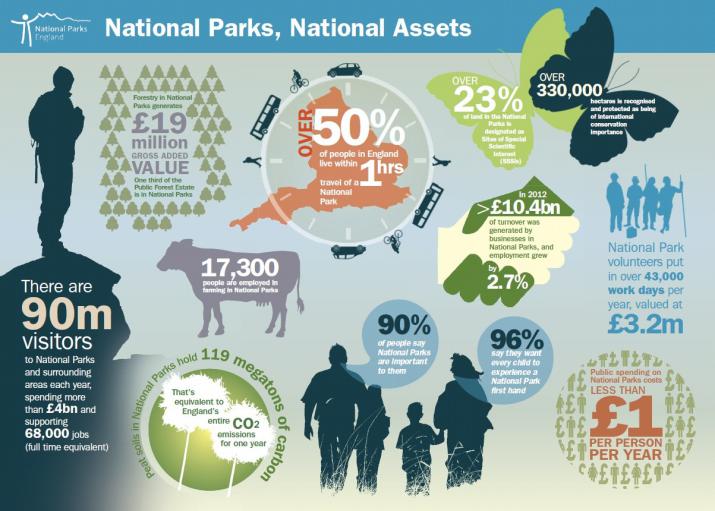 A new report, Valuing England’s National Parks, published by National Parks England shows the importance of National Parks not just as iconic landscapes and part of our national identity, but as thriving rural economies contributing to national prosperity and wellbeing through their special qualities.

John Dyke, Chair of National Parks England, said:
“English National Parks contribute between £4.1-£6.3bn to the economy through economic activity within their boundaries. That’s equivalent to the UK aerospace industry. This report really shows the great value of National Parks to the economy and National Park Authorities’ role in supporting rural communities and businesses. It also reminds us of the other benefits National Parks provide – clean water, stunning landscapes, wildlife habitats, a place to relax or to be active to name but a few. These are hard to put a figure on but immensely important to us all as are the economic benefits that flow from them.”

Environment Minister Richard Benyon MP said:
“Our National Parks are the most treasured places in the country. More than 90 million people visit them each year, helping to boost economic growth in rural areas. This report highlights the value of these areas in promoting tourism and contributing to the UK economy.”

The report is packed with information and case studies showing how National Park Authorities support rural businesses, communities and economies while ensuring the National Parks remain beautiful places where people want to live, work and visit with rich cultural and ecological assets.

Jim Dixon, chief executive of the Peak District National Park Authority said:
“We recognize that the value of a national park depends on its people - the farmers, businesses and residents who look after it. We cherish their commitment to the Peak District, and support them through our advisory services, practical help to access funding and the Environmental Quality Mark certification scheme.

“This report shows the economic boost of a national park extends well beyond its boundaries, but so too do other benefits. For instance, the Moors for the Future Partnership’s moorland restoration programme helps purify water-supplies, stem flooding in nearby cities such as Derby, Sheffield and Manchester, and retain carbon to combat climate change.

“These are among a host of reasons why national parks are special areas that need to be safeguarded for the public good.”

Other headline messages from the report are shown in the short video National Parks, National Assets (http://www.youtube.com/watch?v=vqHNKu_O0J4 ) and an infographic (shown above).