Land distribution in Ireland in the twentieth century 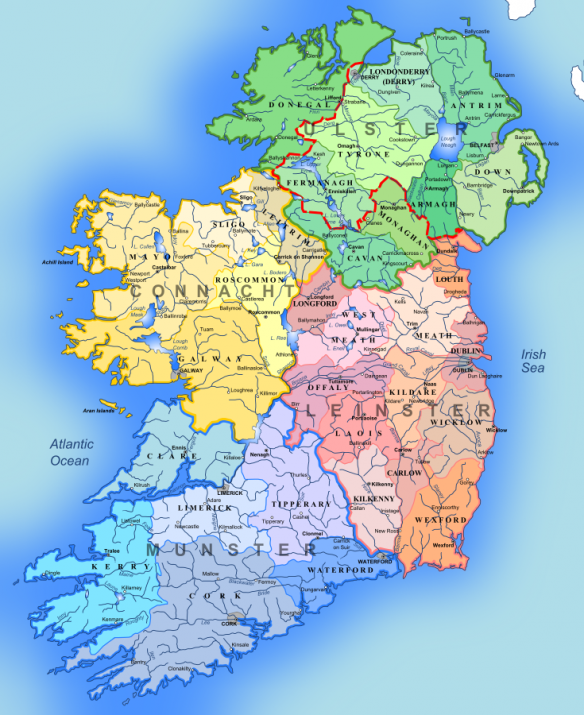 Between 1909 and 1989, an extensive program of land distribution was implemented in Ireland initially under British rule and then after 1922 under the Irish government (excluding six counties of Ulster which remained in the United Kingdom). The program was designed to alleviate the dire poverty of the large numbers of small farmers who lived on what was referred to as ‘uneconomic’ holdings from which they could barely eke subsistence. On a typical ‘uneconomic’ holding the occupier worked barely 15 acres of poor to medium quality land,  in many cases much less, grazed five or six  livestock,  and cultivated two or three acres mainly for oats, potatoes and meadow. In addition,  he/she had little in the way of fixed capital (implements, machines, drains and farm buildings). Such  occupiers had not enough to live on in comfort,  struggled to meet basic necessities such as clothing and  food, and lived in cramped, damp and insanitary cottages. These farms were found in all counties but the largest concentrations were found in the so-called Congested Districts of the western counties with their occupiers known as congests.

The problem of 'uneconomic' holdings

The problem of ‘uneconomic’ holdings dated back to the nineteenth century  (in some cases  even pre-dating the great famine of 1845-1849), when land holdings multiplied and became ever smaller. This was the result of high birth rates, multigeniture (land apportioned amongst all resident sons when inherited),  and loss of land to large landholders especially during the so-called clearances (mass evictions)  that followed the famine (1850-1857). Land distribution entailed the break-up of farms which did not provide ‘adequate’ production or employment and did not follow ‘proper methods of husbandry’. As understood in twentieth century Ireland, ‘proper methods of husbandry’ referred to a system of mixed farming which combined crop growing, cattle grazing and dairying, and farm yard enterprise (poultry and pigs),  provided employment for hired labourers and met basic requirements such as the use of fertilisers and farm implements, good drain maintenance and crop rotation. The farms which failed to meet these requirements and were thus acquired were large holdings mainly or exclusively used for grazing cattle and sheep, from which large profits could be made, and owned by or let to so-called graziers or ranchers.

The power to acquire and divide such farms was given to state agencies.  Under British rule, they were the Congested Districts Board and Estate Commissioners, and after 1922 under the Irish government comprising the 26 counties, the Irish Land Commission. While most land for distribution was acquired compulsorily, many owners sold their land to the Land Commission  under a voluntary purchase scheme. The recipients of land  (known as allottees) were in the main ‘uneconomic’ holders and congests who lived near to an estate which had been acquired, and were given additional land which was consolidated with their existing holding.  A significant minority of ‘uneconomic’ holders were migrated from areas of poor land in the western counties known as the Congested Districts and resettled on new holdings in the more fertile east, mainly in counties Meath, Westmeath and Kildare.

Part of the land distribution program also involved the rearrangement and consolidation  of  small holdings in many areas in the Congested Districts.  A feature of these areas was the extensive fragmentation of the land structure, referred to as 'rundale', which was inimical to productive farming. The holding of  each congest was divided into numerous minuscule plots or strips (often a fraction of an  acre) scattered about and interspersed with the plots of other congests. The locality thus was a patchwork of inter-mixed tiny plots of land. Through a process of exchange, rearrangement and additions of land from any local large grazing farm  which had been acquired, the rundale holdings were consolidated into  compact units.

From 1909 to 1989 2.6 million acres were acquired and distributed which accounted for 22 per cent of all the area under crops and pasture and 15 per cent of all rural land including waste and bog.  Most of the acquisition and distribution occurred after independence in 1922. All 26 counties were affected, the main ones being those of the west containing the Congested Districts (Roscommon, West Cork, Clare, Donegal, Galway, Kerry, Leitrim, Mayo, and Sligo) and those in the rich grazing  areas of the east  (Meath, Westmeath, Kildare, Leix and Offaly).

To pay for at least part of the cost of enlargements or new holdings allottees were given an advance by the State which was repaid in bi-annual instalments known as annuities. The dispossessed owners were compensated not in cash but through so-called land bonds bearing a fixed rate of interest, with the interest paid in cash. The bonds were eventually redeemed for cash at a future date in some cases 66 years from the date of acquisition.

Image 1 and 2 below: An estate in Co Meath before division, 1950 and the same estate after devision. 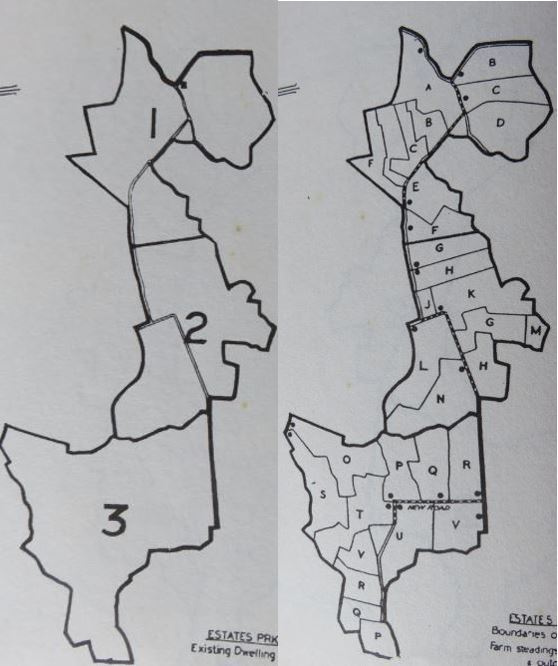 Effect on land structure, land use and landscape

Land distribution affected land structure (size in area and valuation and the extent of sub-division or fragmentation of a holding), land use and landscape in a number of ways. Overall the previous uneven pattern of small holdings of less than 20 acres existing alongside large grazing farms of several hundred acres was replaced by a more even pattern of  medium-sized holdings of 30-50 acres (see Images 1 & 2 above).  In the rundale communities of the Congest Districts, the opposite occurred: a highly fragmented land structure of tiny plots was replaced by a land structure of relatively compact and even medium-sized holdings (see Images 3 & 4 below).

Image 3 and 4 below: A rundale locality in west of Ireland, 1950 and the same locality after rearrangement and consolidation. 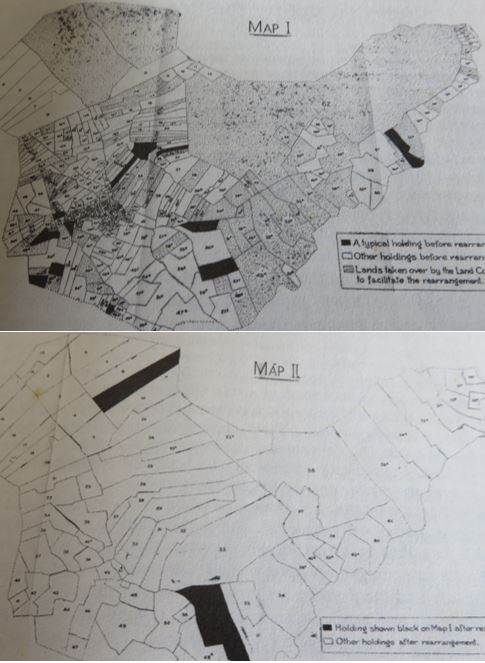 Secondly,  as a result of improvements undertaken by the Land Commission alongside land distribution, the holdings of the recipients of land were better drained,  resulting in less flooding and better cultivation.  The improvements also led to the building or upgrading of farm access roads and the erection of fences to clearly separate the lands allocated to allottees.  In rundale areas subject to consolidation and rearrangement and in eastern areas where migrants were settled, the landscape was marked by modern houses and farm buildings erected by the Land Commission (see Image 5 below). 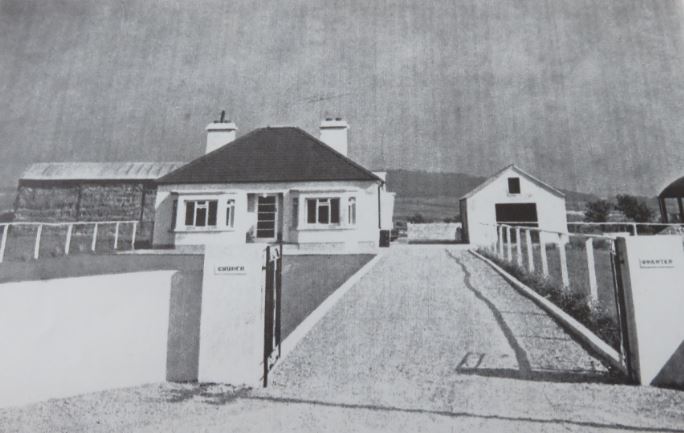 A number of the extensive grazing farms which were acquired, mainly in the west,   were in parts covered by thin infertile soils on rough rocky moorlands. These stretches of land could not be cultivated and thus were unsuitable for distribution. Instead the Land Commission sold them to the Forestry Division. This lead to the creation of large tracts of planted evergreen forest. From 1922, nearly 120,000 acres were acquired and converted in this way.

Grassland and meadow continued to cover most of the rural landscape as cattle and sheep farming and dairying remained the main sectors of the agricultural economy. Although  recipients of land cultivated  sections of their holdings alongside dairy farming and cattle and sheep grazing in a system of mixed farming, this made little difference to the dominance of pasture in the rural landscape.

Dr. David Jones has worked in the agricultural advisory service in Northern Ireland and Professor of Political Science in Singapore and Brunei. He has undertaken a wide range of research on land reform in Ireland in the nineteenth and twentieth centuries, including land distribution. His book Graziers, Land Reform and Political Conflict in Ireland (Washington: 1995) focuses on land reform and land distribution before Irish independence in 1922. Contact David at: dsjones1x@gmail.com