Assessing the role of seagrass meadows as carbon sinks in Europe 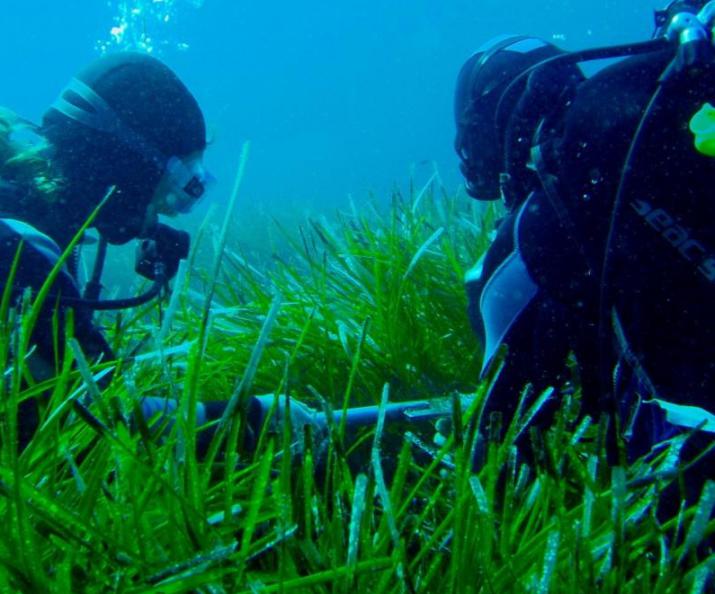 Seagrasses are one of the only flowering plants that can live underwater. Seagrasses form “meadows” that are highly productive ecosystems and hot spots for biodiversity, serving as habitat and food for iconic species such as dugongs in tropical areas, and nursery grounds for commercially important species of fish. Recently, their value as carbon stores and sequestration (along with other vegetated coastal ecosystems), have become more apparent and they are collectively known as ‘Blue Carbon’. Recent studies have estimated that the carbon burial rate in seagrass meadows might be higher than that of terrestrial forest.

Despite their enormous socio-economic value, seagrass meadows are some of the most heavily used and threatened natural systems globally; 30% of seagrasses have been either lost or degraded worldwide over the last 50 years. Unlike terrestrial carbon sinks (e.g. tropical rainforests and the Reducing Emissions from Deforestation and forest degradation (REDD) programme), blue carbon is less well understood and not yet fully recognised at the international level.

The major issue is the geographically limited number of studies that have been undertaken to date and the lack of clarity on the carbon sequestration capacity of seagrass meadows. As a result, there has been a tendency to generalise the carbon capture attributes of seagrasses from a very limited data set. Neither has there been much consideration for landscape configuration of seagrass meadows. For example, in a dynamic intertidal environment the location and proximity of different habitats or processes are likely to influence seagrass carbon storage capacity as a whole, as well as affect the proportion of different sources of carbon that get trapped.

Some of the questions that need to be answered include: what are the environmental factors that regulate the carbon sink capacity? How does disturbance of the seagrass meadow affect the carbon buried in the sediment?

With the aim to clarify some of these questions, we, Inés Mazarrasa and Maria Potouroglou, are conducting our PhDs, in the Department of Global Change Research at the Mediterranean Institute for Advanced Studies (Mallorca, Spain) and Edinburgh Napier University (Edinburgh, Scotland), respectively. Our different locations allow us to focus on two different types (Genus) of seagrasses (of relevance at the European scale)  and a range of environmental factors derived from the different seascapes. Both regions have in common, an intense increase in coastal urbanisation during the last century that usually inhibits seagrass meadow density and primary productivity, while increasing the input of other sources of carbon (such as phytoplankton or terrestrial detritus). Our aims are to try and reconstruct the carbon burial rates and identify the carbon sources accumulated over the last 100 years: the period when most of the coastal urbanisation occurred in both studied areas.

At the Department of Global Change Research, in Mallorca, I, Inés Mazarrasa have focused on Posidonia oceanica meadows, an endemic species and a key ecosystem in the Mediterranean Sea. It forms lush and extensive meadows between 0 and 45 m depth along the Mediterranean coasts. It is considered as the most relevant species in terms of carbon sequestration capacity, due to its size, high biomass, high primary productivity and long and dense canopies that act as a very efficient particle trap. However, only a few measurements exist so far and are highly variable among sites, suggesting the relevance of environmental factors controlling the carbon accumulation rate. In addition an approximate 6.9% of the total P.oceanica vegetation was lost annually during the last 50 years due to anthropogenic pressures (such as eutrophication or physical damage of the seabed)[1], with unknown consequences for the carbon deposits in these meadows.

I chose the Balearic Islands as a case study. The archipelago of the Balearic Islands is a top tourist destination in Europe, which developed in the 1960s, leaded to an increase in urbanisation and usage of coastal areas and a general decline in the water quality. Along with an increase in anthropogenic pressure I also assessed the effect of wave exposure, expecting to find higher carbon accumulation rates in sheltered meadows (where sedimentation is greater than erosion).

At Edinburgh Napier University, in Scotland, I, Maria Potouroglou have focussed on two species Zostera marina and Zostera noltii. Zostera spp are the most widespread seagrass genera throughout the world and also the most widely distributed in the northern hemisphere. The extent and distribution of seagrass meadows in Scotland is not well known and there is uncertainty about the methods used and accuracy of data. However, seagrass extent has been estimated to be approximately 1600 ha, with the most extensive intertidal mudflats found along the East coast. Taking into consideration all these factors, sediment sampling along with seagrass mapping was conducted at 7 estuaries distributed along the east coastline of Scotland, from the Firth of Forth in the south to Dornoch Firth in the north. My research aims to provide an estimate of the carbon stored in intertidal seagrass sediments of the under-represented regions of Scotland and also assess the carbon storage capacity of Zostera spp.

The management and conservation of these habitats may be the missing link in our efforts to slow the pace of climate change. Hence, we are hoping through our PhD projects to achieve two things; Firstly, to answer some of the key questions in seagrass carbon storage capacity and secondly, to communicate our science, engage and inform practitioner’s, researchers and the public of the importance of these interesting, valuable and yet underestimated ecosystems!

Inés and Maria will get back in touch to provide some preliminary results from their data, later next year. In the mean time for more information visit: http://thebluecarboninitiative.org/ or the Department of Global Change in Mallorca and Edinburgh. Or alternatively, please email imazarrasa [at] imedea [dot] uib-csic [dot] es (Inés) or M [dot] Potouroglou [at] napier [dot] ac [dot] uk (Maria).

With thanks and regocnition to Nuria Marbá and Carlos Duarte,  Mark Huxham, Karen Diele and Hilary Kennedy, and the Department of Global Change in Mallorca and Edinburgh.