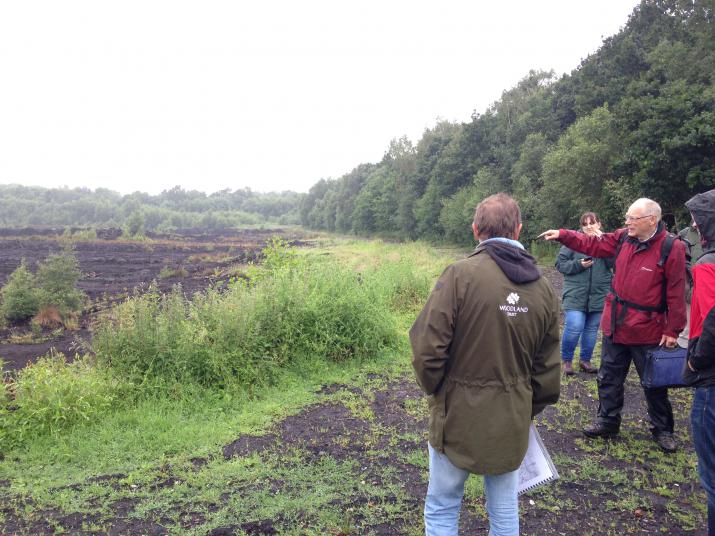 It was with a little trepidation that I found myself walking down Manchester’s Oxford Road one morning this summer. The surroundings themselves were familiar from dozens of trips to the city’s various music venues as a teenager, and the fact that my waterproof jacket was getting used on day one of my visit contributed to the sense that I was at home. I was wary, though, as I was heading to my first conference on Landscape Ecology; a discipline which I had never heard of until I started my PhD nine months previously. Surely I would be found out as a charlatan by the end of the first coffee break, my poster ridiculed, and quite possibly left for dead during a proposed field trip to Salford.

Happily it quickly became clear that the other delegates were a very friendly, interested and interesting bunch. The various perspectives offered by the mixture of academics, practitioners, and policy advisors helped to create an open environment making for easy and varied conversation. The conference topic — 25 years of landscape ecology — resulted in us all benefiting from an expert survey of the history of the discipline delivered by Bob Bunce (Estonian University of Life Sciences) on the first morning. Additionally, the well curated thematic plenary sessions — The long view on landscape ecology, Upland landscape ecology, Lowland landscape ecology, and Seascape ecology — provided a great overview of the different kinds of landscapes which people can choose to specialise in, accessible even to a newcomer such as myself.

The importance of time

In keeping with the conference topic, many of the speakers emphasised the importance of the role of time in understanding the landscape; a concept which one might intuitively associate more closely with space. In particular, Roy Haines-Young (Fabis Consulting Ltd.) observed that a consequence of the technological developments in the field of GIS over the last 25 years have led to researchers understanding the spatial structure of landscapes more clearly than their dynamics (which should be understood as being more than simply a stack of GIS time slices). Roy stressed that there should be an ongoing research focus on understanding the qualitative changes which landscapes undergo through time. Later in the day Duncan McCollin (University of Northampton) reminded us of the work done in the field of historical ecology and the role which such thinking can have in escaping the atemporal equilibrium paradigm, which is common in landscape ecology, to begin to understand non-equilibrium landscape dynamics.

On the second day of the conference, Kevin Watts (Forest Research / University of Stirling) raised the issue of time (specifically time-scales) in the context of empirical experimentation. He explained that because biological response to changes in the landscape and ecological succession take place over decades or longer, to achieve ecological realism experiments must be allowed to run for much longer than a typical 3–4 year academic funding cycle. An example of a solution to this issue is the Woodland Creation & Ecological Networks (WrEN) project which Kevin works on. This involves the study of 106 woodland sites whose ecological history is known for over 100 years and can be considered a long-term, large-scale, ‘natural experiment’.

As a finale to the conference, all delegates were offered a choice of field trips. I opted to join John Handley and Anna Gilchrist (University of Manchester) on an excursion to Lindow Moss near Wilmslow. Coming from a very much desk-based background I found John and Anna’s explanation of the ecological importance of (and related historical interest in) the Moss extremely interesting and memorable. Particular highlights for me were the remains of an ancient pine forest which was fossilised in the peat bog, and the find site of Lindow Man — a bog body discovered in the Moss in 1984.

How the conference helped my PhD

This was a particularly enjoyable conference which helped to convince me of the real sense of community which exists around ialeUK as an organisation. As a student it is really quite reassuring to meet so many professional people outside academia using the knowledge and skills you are investing in developing! That is not to say I didn’t find significant academic value in the conference. The recurring theme of the importance of time in understanding landscape processes resonated strongly with my own work using Agent Based Models to explore how the transition to agriculture in Iberia during the Holocene influenced terrestrial ecosystem change. I think computer simulation offers novel opportunities to probe the system level dynamics of processes occurring at the landscape scale, so feedback from the community indicating that I’m heading in a potentially interesting direction was much appreciated. I would certainly recommend future ialeUK conferences to other students (PhD or otherwise) as they are clearly welcome and are well represented in ialeUK generally.

Andrew Lane is a PhD student in the Geography Department at King’s College London. Contact him at: andrew.lane@kcl.ac.uk or on twitter: @alanescience