The Future of Welsh Landscapes 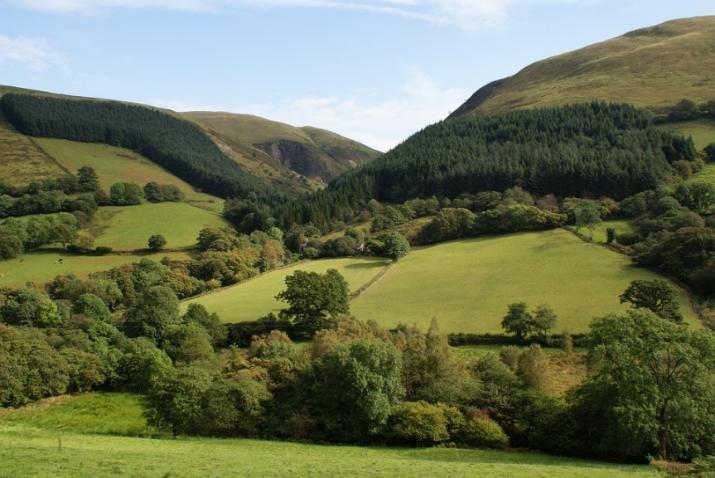 The changing landscape of  Wales

Characterised by a rich heritage, culture, and diversity, the landscapes of Wales reflect its rugged topography and long history of agricultural settlement and industrialisation. As a result, the Welsh countryside contains a range of important habitats including woodlands, semi-natural grasslands, heathland, fens, bogs, dunes and saltmarshes, and a diverse range of upland and montane habitats.

Significant changes in the composition and extent of Welsh forest cover are likely to take place in the coming decades. There is strong political interest in enhancing forest cover across the UK, with the Welsh Government also committed to increasing the overall forest area in Wales including a shift from non-native conifers to native broadleaved tree species. There are several reasons why broadleaf-to-conifer forest conversion is seen as an important tool of forestry policy in Britain. Apart from the strong aesthetic preference among the public for broadleaf woodland compared to conifers, broadleaf tree species tend to reduce soil acidity, improve growth conditions for ground vegetation and soil fauna, enhance nesting opportunities and seasonal availability of food for bird communities and decrease the prevalence of insect pests and plant pathogens.

Predicting the implications of policies through land use change modelling

In a diverse and ecologically sensitive landscape like Wales, it is essential to visualise and understand the spatial and temporal implications of land change policies. We used a land use change modelling approach to project the current trends of land use change to the year 2030 (i.e., the business-as-usual scenario) and an alternate policy-based scenario (i.e., the ecosystem conservation scenario) to understand the extent and direction of major land use transitions. We tried to answer questions such as, (i) under recent policies, what would the state of forests in Wales be in 2030 and, (ii) what are the implications of an alternative policy scenario designed to stimulate new woodland creation while considering other objectives, such as the conservation value of non-woodland habitats?

Highlights of the results

High-resolution future land cover simulation maps using these predictors offer an evidence-based tool for forest managers and government to test the effects of current and alternative policy scenarios. We demonstrated that the current level of expansion and restoration of broadleaf forest in Wales is sufficient to deliver on existing policy goals. Under the current trends (i.e., the B-a-U scenario) broadleaf forest is likely to experience a net increase of 43 366 ha in area, most of which is likely to come at the expense of semi-natural grassland, improved grassland and coniferous forest. We also show the impact  of a more ambitious afforestation policy on the Welsh landscape. In a key finding, the highest intensity of broadleaf expansion is likely to shift from south-eastern to more central areas of Wales (Figure 1) . 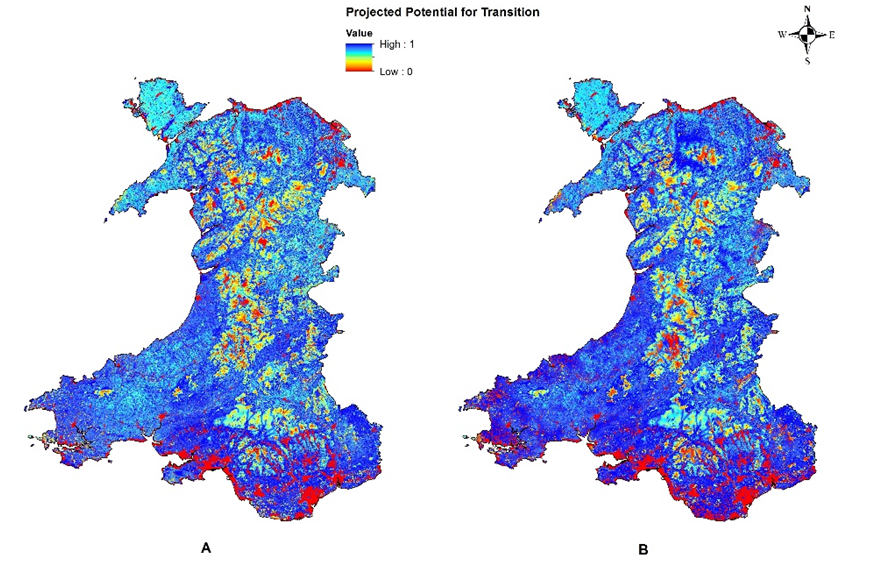 Above: Projected land use change in Wales under Scenario A (B-a-U)  & Scenario B (Ecosystem Conservation)

More applications of the projected land use maps

In addition to the utility as a decision support tool for broadleaf forest expansion in Wales, the output maps of this study can be used for a range of habitat, ecosystem services, and biodiversity analyses. The ‘State of Nature (2016)’ report for Wales strongly associates the changes in ecosystem services with habitat defragmentation and degradation. These future land use maps can, therefore, be used to model likely changes in ecosystem services including carbon storage and sequestration, habitat fragmentation, the abundance of wild pollinators and distribution of invasive and other ecologically important species. We are keen to hear from ecological modelers interested in using these maps for further studies and welcome any queries regarding the utility or limitations of the projected land use maps.

Availability of the projected maps for further research

This study has been published in the Royal Society Open Science journal. All the data used in this study are available online, and the output maps (in editable and reusable formats) are openly accessible under the Creative Commons license.

Syed Amir Manzoor is a research student in the School of Agriculture at the University of Reading supervised by Prof Martin Lukac and Dr Geoff Griffiths. Amir is interested in the development of techniques to project land use into the future, currently working with the Brecon Beacons National Park in Wales and as a member of the GCRF-funded  Sentinel project in collaboration with the International Institute for Environment & Development (IIED) to model the impact of agricultural expansion on forest biodiversity in sub-Saharan Africa