Why the future of roofs is biosolar! 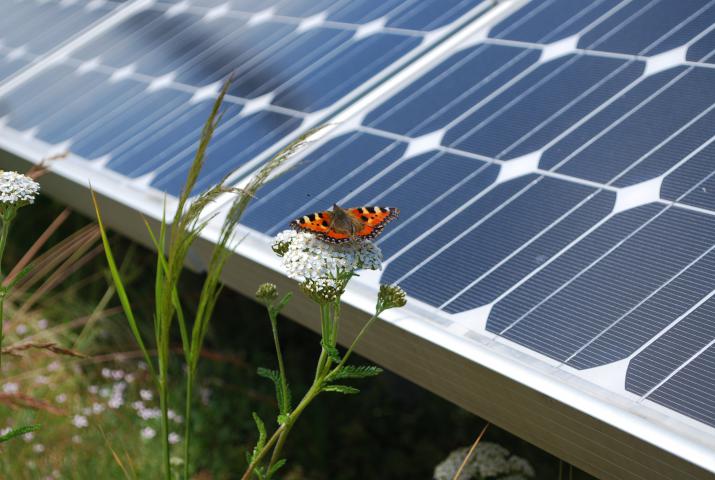 Cities around the world are feeling the impacts of climate change, including severe overheating and flash flooding, poor air quality and increased water pollution. This is having a knock-on impact on economic activity and people's health and well-being. We are also losing biodiversity, especially pollinators and at an alarmingly rapid rate. The cost of fossil fuels is rising, financially and environmentally. Is this the perfect storm Hollywood pictured?

The good news is that in Paris this spring, governments agreed to design out fossil fuels by 2050. We also know how to design buildings that can run on minimum energy, or even generate energy. We also have the ability to decarbonise the grid and create energy resilience by decentralising renewable energy production. Green roofs have in recent years shown how they can provide well for pollinators, including threatened species that have declined in the agrichemical countryside. But how do we do achieve all this in cities where space is at a premium? One of the ideas taking hold is biosolar roofs.

In 2013, the European Commission launched a strategy to provide habitats for nature and ecosystem services for cities, through the integration of urban green infrastructure. Green roofs and walls, rain gardens, street trees, parks and private gardens together deliver mulitple services by cooling the city and providing havens for nature. However, as densification becomes a trend in many cities, space at ground level will continue to be limited, so the roof often provides the only location to implement biodiversity measures and energy plants.

For many planners, architects and sustainability professionals, the question of what to provide at roof level is often seen as an either-or situation: either green roofs or solar-power panels.   However, Switzerland and other countries have been using a combined approach for many years, generating solar power at the same time as providing biodiverse habitats that are cooling the city, storing storm water and improving air quality. Its important to know that biosolar roofs create a symbiotic relationship between the two technologies. Cooling from the green roof can increase the efficiency of the panels, as it reduces overheating. The panels themselves can increase the biodiversity potential of the green roof, offering more varied habitats for a wider range of species. This is intelligent, sustainable design and there are a number of examples of such combinations in many European cities.

The Status of Biosolar in Design and Practice

Many local authorities, especially in London, are now requesting that new developments incorporate both solar and green roofs. However, in most cases these will be on seperate roofs within the same development, rather than combined on the same one! In London, the Media Centre at the Olympic Park hosts the largest biosolar roof in the UK. Allies and Morrison designed the building, whilst the detailed design was undertaken by a specialist, green roof consultancy. The roof was originally designed to meet the Olympic green roof target and Biodiversity Action Plan. Later in the design process, solar was needed on the roof to make up a short fall in the renewable energy target. Through careful design, the roof was able to meet all three objectives. Furthermore, three of the Olympic Biodiversity Action Plan target species: black redstart Phoenicurus ochruros, toadflax brocade moth Calophasia lunula and Brown-banded Carderbee Bombus humilis (the latter being one of the rarest of UK solitary bees) have since taken up residence amongst the solar panels.

Adding solar panels onto a green roof has multiple benefits and is genuniely future-adapted power plant that enables:

This enables architects and engineers to play a key role in climate change adaptation.

It is not all plain sailing. The integration of solar and green roof technologies requires skill and understanding. Biosolar roofs can be badly designed. Designs that do not ultimately perform well for both technologies are often down to a lack of understanding and the assumption that the solar panels require more technical input then the green roof. Getting the green roof wrong can mean the vegetation is forced around the panels, which results in shadowing that reduces energy generation. This example from North London is a classic! Too many panels have been placed on the roof, the wrong panel supports have been used, and the invasive, woody, butterfly bush Buddleja davidii is taking over. This is a relatively simple situation to avoid with the right information and design approach. Switzerland and other countries have been showing for a while, that done well, solar and green roofs can improve the performance of both elements.

In many German-speaking Swiss cities there are policies that encourage biosolar. Recently the French speaking city of Lausanne has followed suit with a similar initiative that may well lead to a change of policy in the French speaking part of the country. Zurich University of Applied Sciences (ZHAW) in West Denswil has had a biosolar roof for many years. The Messe Hall in Basel, designed by Herzog & de Meurons, opened in early 2000 with one of the largest biosolar roofs in Europe. It is the largest exhibition centre in Switzerland and its large urban footprint offered significant opportunities at roof level. In 2013 an extension with further solar and green roof capacity was added.

The Biosolar Roof Project is a European training program that links the Smart Cities agenda with the Urban Green Infrastructure and Ecosystem Services approach. In September, London’s Deputy Mayor for Environment and Energy, Matthew Pencharz opened the 1st European Biosolar Roof Conference at London City Hall. Speakers from across the Union demonstrated how to deliver well designed and productive biosolar roofs for cities.

The Biosolar Roof Conference gave architects, landscape architects, developers and suppliers a taste of what it is really like to get to grips with a good biosolar roof approach. The European Biosolar Roof training programme was launched at the event and will be delivered across Europe to support the delivery of biodiverse, energy resilient and climate adapted cities. This conference was part of helping to ensure that, wherever possible, green roofs and solar roofs are no longer considered as an either-or, but delivered together, in perfect harmony and delivering multiple ecosystem services on one roof!