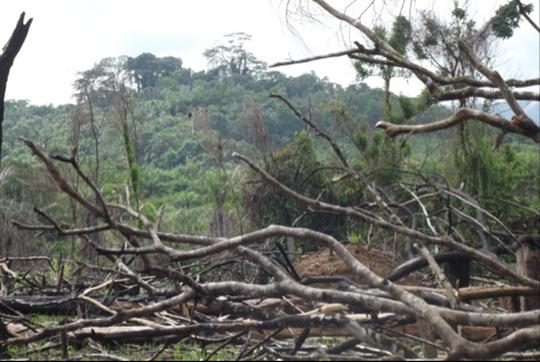 Recent reports in the press and from the NGO sector (Oxfam, 2008, 2012) have highlighted the problems arising from the granting of land for large-scale plantations, particularly in parts of West Africa. This so-called ‘land grab’ in Africa has raised concerns about the environmental and social impacts of replacing, in many cases, extensive tracts of tropical forest with plantations of palm oil grown for biofuel production and other products. The increasing body of evidence that biofuel production is generating the release of more greenhouse gases than the fossil fuel it is meant to replace, largely as the result of indirect land use change (Smith & Searchinger, 2012), has prompted the EU recently to reduce the targets for fuel from biodiesel.

The potentially adverse social and environmental impacts of large scale palm oil plantations is nowhere more in focus than in Liberia.  As Liberia attempts to rebuild its economy and infrastructure after the 14 years of civil war which ended in 2006, a chaotic system of land allocation has seen overlapping concessions for palm oil, logging and minerals and the alleged violation of customary land rights. As much as 25 percent of Liberia’s land mass, for example, has been granted to logging companies in the past 2 years (Global Witness, 2012), with many logging concessions overlapping with land designated for palm oil.

Geoff Griffiths, a member of the iale UK committee, with colleague Ruth Evans also from the Department of Geography and Environmental Science at the University of Reading, has been asked by Sustainable Development Institute Liberia, an NGO, to undertake an environmental and social assessment of a large concession in Liberia.  The aim of the pilot was to assess the impact of clearance of land for palm oil on both the environment and on the livelihoods of local people. A simple landscape approach was developed providing a spatial framework within which to evaluate the contribution of broad land cover classes including, high canopy tropical forest, secondary forest, and a shifting mosaic of secondary forest - cultivation and swamp land towards the provision of ecosystem services. Secondary sources of data were used to determine the significance of high caopy and secondary forest as carbon sinks for global climate regulation.

Based on interviews with a cross - section of local people from 10 remote communities, a picture of local resource use was established demonstrating the critical importance of remnant forest for bush meat, medicinal plants, fuel wood and building materials. This ecosystem-based approach was translated into maps of the contribution of different ecosystem types for ecosytem services (MEA, 2005) and mapped at landscape scales.  The results demonstrated that the area available for palm oil would be less than 10 percent of the total concession if endemic bird areas (Birdlife International, 2012), high canopy forest and the customary land rights of local people are to be adequately protected.

Future work involves a detailed social assessment of the potential impact of large scale palm oil concessions, based on transcripts of interviews with a cross-section of local people (men, women and young people and government officials) to determine attitudes to the proposal and evaluate impacts on livelihoods and future development. It is anticipated that the overall approach, integrating the ecosystems approach with social surveys, will provide a useful template for the assessment of large scale concessions in other parts of Liberia and West Africa.

Department of Geography and Environmental Science, The University of Reading, UK.

Global Witness. 2012. Signing their lives away – Liberia’s Private Use Permits and the Destruction of Community-owned Rainforest. Global Witness Report.