Arts and the artist in landscape and environmental research today (AALERT) 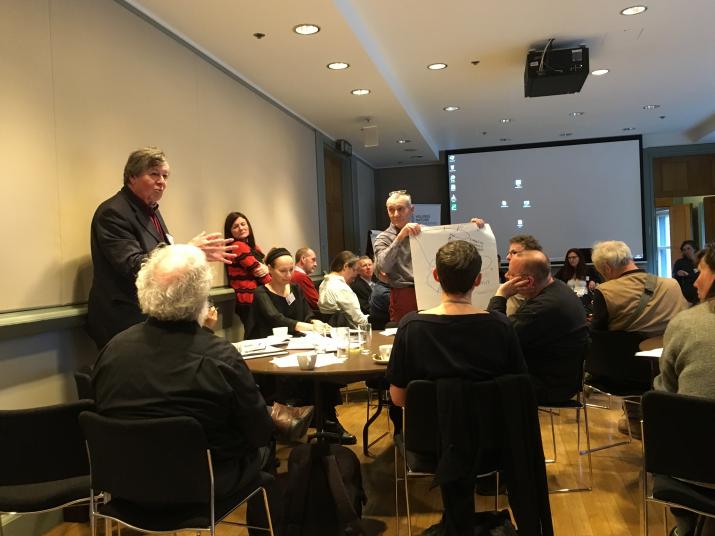 Artist's with ecologists - get used to it!

This is a summary of a one-day workshop at The National Gallery, London, held in January 2018.

If this event was anything to go by, then ecologists will need to get used to artists being in their midst. Environmental policy in the UK is slowly shifting from its biodiversity-led focus towards a more socially-inclusive multi-functional landscape approach. Some of this movement comes in the wake of Britain’s adoption of the European Landscape Convention (new window). Some of the shift comes from the rise of Natural Capital accounting with its search for a diverse set of Ecosystem Services.  Environmental research gets bound up with these shifts as both cause and effect. AALERT set out to clarify how, given this context, artists and the arts might have a more decisive role in inter-disciplinary environmental research than has been typical thus far.

Background to the event

I joined the AALERT team having devised and programmed the 2016 symposium Artists, Farmers and Philosophers (AFP) to which AALERT was a response.  Eirini Saratsi, a lecturer in the department of Geography and Environmental Science at the University of Reading, wrote a critique of AFP in Landscape Research Extra. The artist Tim Collins picked up the gauntlet and he and Eirini formed a team and secured funding from Valuing Nature and the Landscape Research Group to make AALERT happen. AALERT’s 60-odd participants included artists, geographers, ecologists, curators, philosophers, writers, funders, policy-makers, conservationists, consultants and other humanities academics.

The workshop was structured around three fundamental queries.

Nine tables of  seven people took on one of these queries each, discussing in general terms, then with reference to a particular scenario. The first scenario placed an artist with farmers, seeking to understand unarticulated values that contribute to good environmental stewardship. The second and third scenarios placed artists in inter-disciplinary teams working on climate change projects. These discussions were all recorded and shall be made available by the organisers in due course (keep an eye on ialeUK twitter feed for updates).

The place of artists in inter-disciplinary teams had been brought into focus by keynote speaker Professor Stephen Daniels, who as Programme Director of the AHRC Landscape and Environment Programme, has done much to progress inter-disciplinary working between science, the arts and humanities. More infomation about Stephen can be found here (new window). Professor Daniels remarked upon the wary attitude that the sciences have historically had towards the arts.  The room took a deep breath when he quoted Lewis Wolpert:

“Although science has had a strong influence on certain artists …..art has contributed virtually nothing to science.”

The three tables discussing this third query fashioned a riposte to this, proposing  that artist-led teams could be a key to successful inter-disciplinary innovation. There were some passionate advocates for the proven worth of this principle, warmly received by a room galvanized by the Wolpert quote.  Providing a rationale for that leadership proved trickier on the day. Three tables discussed the artist’s agency. Their accompanying scenario, where an artist works with farmers to reveal how their aesthetic and ethical values inform their farming practice, was criticized for being too constrained and too instrumental in its purpose. Artists in particular found this contentious. As the scenario’s author, the blame is all mine.

The artist - an honest-broker role?

Anyone acquainted with the history of aesthetics will know that when a philosopher tries to pin down what an artist does, artists will disoblige. "Box us in and we’ll go out of our way to defy you!" The paradox at the heart of the day’s discussions therefore revolved around attempting to generalize about a cohort of people who rightly refuse the confines thereby placed upon them. At AFP, one contention was that in the social context of environmental projects, artists’ detachment from outside agendas affords us an honest-broker role, able to understand each stakeholders position and so able to weave narratives around which potentially opposing interests can unite. At AALERT, I alluded to this social agency by quoting Belgium’s King Leopold I in a letter dated 1845 to Queen Victoria:

“Dealing with artists require great prudence: they are acquainted with all classes of society and for that reason dangerous “

Within the context of environmental research, this refusal to ‘know our place’ is precisely what is called for. Tim Collins, introduced many of us to the notion of "adisciplinarity." Not yet in the dictionary, adisciplinarity describes a research approach that transcends disciplinary walls by coming a knowledge from an aesthetics perspective. Though this concept stems from the writings of philosopher Jacques Rancière, Tim’s use of the term drew from the recent work of John Roberts, Professor of Art & Aesthetics at the University of Wolverhampton, for whom adisciplinarity is an aptitude in the gift of artists. One of the critical functions still left to artists …. is their ability to borrow from and invest in various knowledge bases without placing themselves at the instrumental service of such disciplines and practices; and this – as a matter of art’s self-definition – is something that should not be underestimated or undervalued. King Leopold’s warning is refashioned here for our era, granting artists the keys to unlocking the latent potential of inter-disciplinary work. AALERT succeeded in bringing this into focus and will undoubtedly spawn further debate in which ecologists must continue to play their part.